Some Nepali people think the current national flag of Nepal, triangular and only such in the world, needs to be changed while others think it’s unique and it’s okay. UWB received an article by Prakash Bom about the necessity of the new flag and a photo of “a model flag for the People’s Republic of Nepal” from Shree Shrestha. 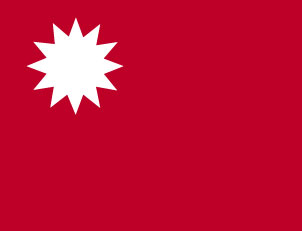 I wish the Nepali leaderships had spoken about the need of a new national flag for a new democratic Nepal before the elections of the constituent assembly. I dream of a national flag of the peaceful stars on the horizon of the summit of Sagarmatha (Mt. Everest) for new democratic Nepal. The number of peaceful stars will get derived from the restructuring of the state under the Federal Democratic government system.

First of all the people did not choose the current national flag, but accepted for granted as given by the feudal oligarchic regimes to lay the Hindu patriotic values. Many of us are caught up with its unique shape without realizing its connotations with the Hindu nationalism that sustains on the royalist values.

We have decided to change the national anthem (article on English). We have suspended the monarchy. We are about to print our national currency with the pillar of national glory – the Sagarmatha. It is time for new democratic Nepal to think over changing the national flag that can symbolize our true nationalism and the value.

Our nationalism rises up to the pinnacle of the Mount Everest and our national values and pride reach to the glory of Buddha, Ansubarma, Bhirkuti and Arniko. That is how Nepal has been recognized and appreciated in the world. On the glory of our true nationalism and pride we have to begin building our new prosperous democratic Nepal.

Our new democratic national flag must be able to embrace our diverse ethnicity, culture, religions, gender, and inhabitance of different geographical regions with the promise to guarantee our civil liberty and human rights; with the federal democratic electoral system for governing our constituents by the elected representatives from each constituent residence. We must transcend all impediments to create a flag of the nation, which can unit us all to serve the nation.

The national flag of Nepal (left) is the only non-quadrangular national flag, and one of only two non-rectangular official jurisdictional flags in the world (the other is the flag of the American state of Ohio). The flag is a simplified combination of two single pennants that represent, for some, the mountains of Nepal while for others the Hindu flags. The flag was adopted, with the formation of a new constitutional government, on December 16, 1962. The individual pennants had been used for the last two centuries and the double pennant since the 19th century.

The blue border denotes peace and harmony that has been prevalent in the country since the age of Gautam Buddha, who was born in Nepal. The crimson color is Nepal’s national color, and it indicates the brave spirit of the Nepalese people. The structure of flag has been the topic of great discussions in recent times, especially in the Constituent Assembly, as Maoists have expressed their wish to change the flag saying the triangles denote that Nepal is a Hindu Country. For them, Sun (surya) and Moon (chandra) denote the ancient Hindu rulers Surya Gupta and Chandra Gupta. It has been clear in the past several months (in late 2009) that overwhelming majority of Nepali people support the current flag arguing that the triangles represent Nepal’s world famous mountains and Sun and Moon symbolize eternal Nepal. Indeed, a very very popular song says:

[The red flag, with Sun and Moon on it, is symbol of our pride that shines just like the blood that flows in us.]

It’s true that triangular flag has been a Hindu symbol of victory since the time of Ramayana and Mahabharata. The depiction of celestial bodies represents permanence, the hope that Nepal will last as long as the sun and the moon. The moon symbolizes that the Nepalese are soothing and calm, while the sun symbolizes fierce resolve.

311 thoughts on “On the National Flag of Nepal”