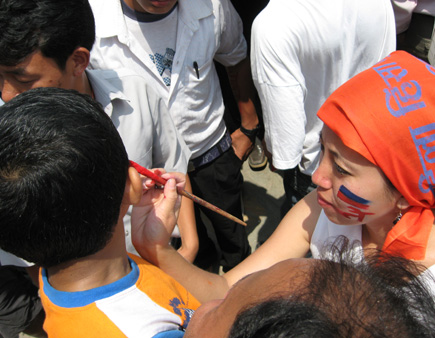 Thousands of jubilant people have hit the streets chanting slogans that hail Nepal as a republic country as the Constituent Assembly is about to declare Nepal a republic. People who have gathered in New Baneswor where the first meeting of the CA will convene in the International Convention Center, are flying colorful balloons, singing songs with almost every line including the word “ganatantra”, painting “Ga” [for ganatantra= republic] signs on their cheeks, “Ganatantra” on their foreheads. Hundreds are now gathering (as of now, 12:48 PM) in Tinkune where they are whistling, chanting slogans and screaming Ganatantra Jindabad [Long Love the Republic], Rajtantra Murdabad [Down With Monarchy], Gyane Chor Desh Chod [Thief Gyanendra, Leave The Country], Soi Dhole Soi, Ganatantra Khoi? [in tune with a traditional Kirat festival song]. Gyanendra, the last king of Nepal, will be given a 15-day deadline by the government to vacate the royal Narayanhitti palace after the CA formalizes the pre-CA election decision of the Interim Parliament to declare Nepal a republic. The meeting of the CA hasn’t started as yet. Political leaders are busy finalizing the technicalities of the declaration, amendments of the Interim constitution that is needed along with the declaration and provision, rights and privileges of the President and the Vice President of the republic of Nepal. 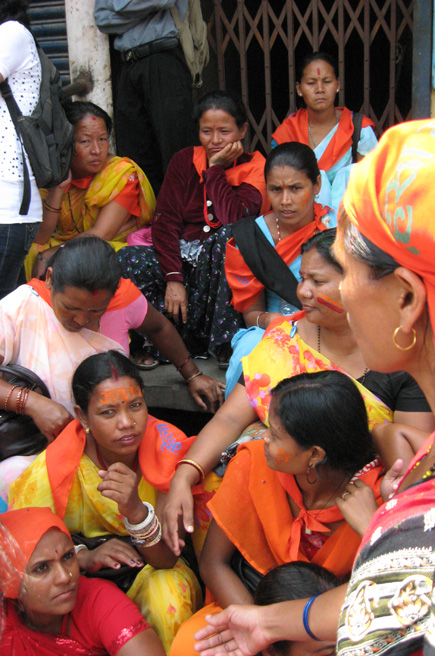 King Gyanendra is expected to be dethroned on Wednesday after a special assembly elected in April abolishes Nepal’s centuries-old monarchy.

Here is a chronology of the history of Nepal and its monarchy.

Medieval period – Nepal is divided into many small kingdoms.

1846 – Jang Bahadur Rana takes over as prime minister and establishes the hereditary rule of the Ranas as prime ministers which lasts for another 104 years. The Shah kings are reduced to figureheads with no authority.

1948 – The country’s first constitution is promulgated.

1950 – King Tribhuvan seeks asylum in India after falling out with the Ranas, who implicate him in a conspiracy against them. The Ranas install Gyanendra, then a toddler, as king.

1951 – King Tribhuvan is restored to the throne and the monarchy once again becomes an important centre of power.

1955 – King Tribhuvan dies and is succeeded by King Mahendra.

1972 – Mahendra dies. He is succeeded by his son King Birendra.

1996 – Maoists launch an armed rebellion from remote Himalayan foothills to try and topple the monarchy.

2001, June – King Birendra and most members of the royal family killed by then crown prince Dipendra, who also dies after the shoot out. Prince Gyanendra becomes king.

2007 – The ruling alliance and the Maoists agree to abolish the monarchy after elections.

Not long ago he was revered as a Hindu god, waited upon by thousands of royal palace retainers. His face crowned banknotes and the national anthem hailed him.

Now Nepal’s King Gyanendra is vilified, set to lose his crown and even pay his own tax and electricity bills.

A special assembly will convene on Wednesday with the abolition of Nepal’s monarchy top of its agenda, bringing to an end the 239-year-old Shah dynasty and leaving Gyanendra to go down in history as the last king of Nepal.

The 60-year-old businessman-turned-monarch has only himself to blame, many Nepalis say, after an ill-judged power grab in 2005 when he dismissed the government, jailed politicians and declared a state of emergency.

Gyanendra was apparently fed up with Nepal’s corrupt and squabbling politicians and decided only he could rescue the country from a deadly Maoist insurgency. (continue reading it here)