A reporter’s diary detailing pre-election atrocities of the Maoist in far west Nepal in Blogmandu.

Eye on Maoist: Even after the surprise victory in the April 10 CA polls, the Maoist hasn’t changed its wartime behavior of intimidation, abduction and killings. The Maoist is increasingly looking like a criminal gang with its YCL engaged in organized efforts to take law into their hands. Here are a few examples of how Maoist (or YCL) are engaged in criminal activities:

Maoist cadres kill a capital resident: Maoist cadres killed Ram Hari Shrestha, a resident of Koteshwar in the Capital, after abducting him two weeks ago. The Maoist conceded that the Shrestha, who was also the chairman of local Tole development committee, was killed after abduction by his own party activists. Locals of Koteshwar disrupted the traffic in the area today afternoon following the airing of the news. They shouted slogans like Maobadi murdabad [Down with Maoist] 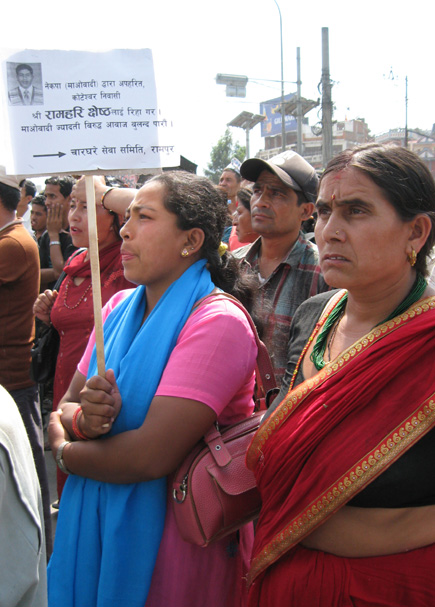 The Maoist admitted that Shreshta was abducted from Santimarga in the capital on April 27 and taken to Maoist third division cantonment at Shaktikhor in Chitwan district and was killed on May 10 and thrown into Narayani River. A group of Maoists led by Maoist third division commander Kali Bahadur Magar ‘Bibidh’ had abducted Shrestha from Santimarga on charge of stealing Rs 1.7 million from their room. Maoist cadres including Bibidh had been staying at Shrestha’s house on rent.

The Maoist cadres told Ramila, who reached Shaktikhor today to bring back Shrestha, that after he was severely beaten up.

Three brigade commanders of the Maoist third division– Ganga Ram Thapa, Keshab Adhikari and Govinda Batala—thrashed him to death, Superintendent of Police at Chitwan District Police Office Puskal Raj Regmi informed. The Maoists have handed over Batala to the district police, while the other two are at large.

“I resigned as I did not like the activities of the YCL. The YCL harassed teachers, other staff and the management committee of the school. I did not like that, so I resigned,” Gurung told the Post over the phone.

Gurung, a supporter of the NTA, which is close to Nepali Congress, further said that he thought resigning was better than watching the pathetic situation at the school. Gurung is a teacher for 18 years.

The YCL was reportedly angry with Gurung since May 30 when the latter closed the school to protest the YCL beating up school teacher Bishnu Dutta Adhikari that day.

A junior teacher close to Maoists has been appointed headmaster of Himalaya Secondary School at Simjung VDC. Rup Lal Shrestha, a lower secondary-level teacher, has succeeded Mishra as headmaster. Mishra, who hails from Rautahat, had been with the school for 12 years.

Maoist district secretary Prakash, however, said that he did not have information about forced resignations of headmasters.

YCL beats up teacher: Meanwhile, the YCL beat up Rameshwor Pokharel, a math teacher at Nepane Secondary School, Kerabari, after accusing him of campaigning for the Nepali Congress during CA elections. Besides, Pokharel, who has sustained serious injuries to his head, has been warned to leave the school. Pokharel has been teaching at the school for the last three years and was elected president of the Free Students’ Union at Gorkha Campus on behalf of the Nepal Students’ Union.

[This report by Dipendra Baduwal] Intervening over a disciplinary issue at a school, Young Communist League (YCL) cadres allegedly beat up and injured two school teachers of Someshwor Higher Secondary School at Madi of the district Wednesday (14 May). The teachers- Krishna Prasad Pathak and Ramnath Tiwari- were badly injured.

According to the victims, YCL cadres led by area in-charge, Chandra Bahadur Darai, turned up at the school, responding to a complaint of eighth grader Shankar Chhetri and beat them up severely. Chhetri, who was scolded by teachers a few days ago after he was found bringing a nunchaku –a martial art weapon — to school and also for disturbing the class, had reportedly called the YCL men.

Prior to this, Chhetri and his classmate Dan Bahadur Magar had been involved in fisticuffs. According to school teachers, Magar, following their dispute, had called his brother to the school and beat up Chhetri on Tuesday. In response, Chhetri had also beat up Magar with the help of other friends while the latter was returning home the same day.

Following the “gang fight”, the teachers felt insecure and also requested the school administration to sort out the problem. “But even as the principal assured he would settle the dispute, we were beaten up by YCL men,” said an injured Pathak. The incident occurred even as the Principal Arjunanda Adhikari made both the students apologize on Tuesday itself.

“YCL cadres showed up at the school in the early school hours and beat us up with sticks while we were reading the newspaper on the ground,” said Tiwari. Pathak is receiving treatment at Bharatpur Hospital while Tiwari was taken to Medical College as his condition was serious, the Hospital source said.

5 brothers assaulted over land dispute in Pokhara: YCL Cadres assaulted five brothers at Pame in Pokhara on Wednesday (14 May). Krishna Bahadur Adhikari, along with his four brothers –Min Bahadur, Bam Bahadur, Bharat Bahadur and Narayan Bahadur of Kaskikot– was beaten by around 60 YCL cadres over a land related dispute. Of the injured, Min Bahadur is in critical condition. He is undergoing treatment at Western Regional Hospital in Pokhara. He has sustained serious injuries on his face and chest.

“As we reached Pame to rescue my brother upon learning that Krishna was assaulted by YCL cadres, they attacked us with bamboo sticks,” said Min Bahadur. YCL cadres also vandalized Min Bahadur’s motorbike. According to Krishna Bahadur, YCL cadres attacked him and his brothers for tilling their land at Pame, claiming that the land actually belonged to one Tek Bahadur. District police did not make any arrest citing that details of the incident were not substantial.

21 thoughts on “People on the Street Chant a New Slogan: Down With Maoist”