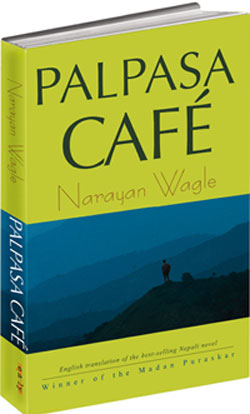 The English language translation of the best-selling Nepali novel Palpasa Café by Narayan Wagle is out now. Palpasa Café is the story of an artist, Drishya, who falls in love with a Nepali American returnee, Palpasa and also, via a college friend, sees the effects of Nepal’s conflict in the hills.

Wagle’s book stands out primarily as an alternative account of the war in Nepal and an embodiment of what the central character, Drishya, calls ‘the stand…of the people who resisted the war-mongers on both sides.’ In broad brushstrokes, like the artist Drishya, Wagle too uses the novel to protest ‘against both warring sides…., my colours showing my support for the third camp.’

Wagle best features are in the broader canvas he paints – firstly in the disappearances and general tension of post-royal massacre Kathmandu and then, of the conflict in the hills. Wagle’s descriptions of schools being blown up, emptying villages, indiscriminate bombs, Maoist attacks on district HQs and mourning Nepali families are extremely hard-hitting and powerful. Novels in this form have a resonance than goes beyond anything produced from Wagle’s journalistic day job. Palpasa Café, almost incidentally, also neatly observes the individual stories in many other aspects of Nepal e.g. diaspora Nepalis, Gurkhas, Nepali-foreigner relationships and internal migration for school and work.

There are faults and things perhaps lost in translation. The descriptions and dialogues between Drishya and Palpasa seem, at times, highly stilted. Their awkwardness is intentional but maybe loses something in English. At their first meeting in Goa the repetitive description of Palpasa’s eyes as ‘fresh, juicy’ like ‘slices of pineapple’ sounds downright corny. The vocabulary improves later though. For example Drishya writes a beautiful letter to Palpasa via her Grandmother:

Your hopes are pinned on the gods, the farmers’ on the mountains and mine on you. I made you dance and you were happy.
The day I saw you dance was the happiest day of my life. It was as though the snow on the mountains was melting in the sun and a magnificent rainbow had appeared on the horizon.

Later too the Maoist underground figure Siddhartha and Drishya argue engagingly around the age-old debates of art and politics and whether it is ‘possible to create without destroying’.

Siddhartha, the old college friend and confirmed Maoist, sums up the difference between him and Drishya saying ‘You give too much weight to the importance of the individual.’ Drishya believes ‘in the supremacy of the free individual’ and cannot accept violence and deaths in the name of a supposedly greater communal good. Wagle too runs with this thread and privileges the individual victims’ stories above all other narratives.

There are times when the story comes apart. The description around the killing of Siddhartha, who is alone at the end, appears more much vivid than the bombed bus episode later. We are also asked to believe that Drishya is spectacularly unlucky in terms of being affected by the war. The individual tragedies and conflict inside the main protagonists is not always well connected with the outer violent conflict in Nepal. In general the Maoist figures and security forces have no real role in this novel and are intentionally shadowy, almost non-human ideologues. However, Wagle himself, in his final cameo appearance within the pages, acknowledges with a wink that he might not have done his characters justice and that ‘all written works are incomplete. Something’s always missing. There’s always more to add.’

Wagle’s message throughout the novel seems summed up by a simple boatman who rows Drishya away from death:

The boatman strained against the current. ‘It’s so sad to see war in our country,’ he said. It’s terrible to see our own people die. Don’t you think so, bhai?’