Update (17:00 PM): Journalists, members of Nepali civil society and political activists took out a rally this afternoon that began from New Baneshwor and ended in Maitighar Mandala as a corner meeting. Addressing the mass Prateek Pradhan, editor of the Kathmandu Post, said that Kantipur Publications, publisher of the Post and Kantipur daily, will not be intimidated by the Maoist threat. He thanked all people for participating and demonstrating solidarity to Kantipur. He also said that Kantipur Publications will continue fighting against the autocratic attitude of the Maoist party. The voice of freedom and the voice of Kantipur will prevail, he said. He also informed the mass that Maoist activists were picketing the Kantipur Complex to bar the journalists and other staffs from participating in the rally. Other prominent personalities including former Nepal Bar Association president Shambhu Thapa, chief of SAFMA Nepal Gopal Thapaliya, Federation of Nepali Journalists president Bishnu Nishturi, prominent actor Sunil Pokharel expressed their solidarity with the Kantipur’s struggle against Maoist.

Filmmaker Samjhana Upriety Rauniar hold a copy of the eastern region edition of Kantipur that was printed in Biratnagar and was brought to Kathmandu by Kantipur Publications.

Meanwhile, Maoist activists surrounded the Kantipur complex and barred some journalists from getting out of the complex and participate in the rally.

Maoist cadres are holding a meeting in the middle of the street in front of Kantipur Complex creating havoc in the traffic.

Journalists looked fearful and anxious about what might happen next. Some reporters have returned from the rally and the chief reporter is telling them to start writing news. “Hurry up guys,” he said. “We must do our duty.”

Update 13:25 PM: Around 70 Maoist Young Communist League activists are surrounding the Eastern regional office of Kantipur Publications in Biratnagar. They are sloganeering against the papers. Eastern editions of both papers were printed (though Maoists disturbed the distribution) from Biratnagar while printing press in Bharatpur and Kathmandu remained closed.

Latest: Both Kantipur and the Kathmandu Post weren’t published from Kathmandu (National editions) today for the second consecutive day (and for the third time in the week). The printing press hasn’t been fixed yet. Maoists also prevented Western editions of both papers from being printed at the printing press in Bharatpur. The Maoist’s All Nepal Trade Union Federation (ANTUF) threatened to bomb Kantipur Publications’ Bharatpur office. The Eastern editions of the papers were printed from Biratnagar but the Maoist cadres obstructed the circulation of both dailies. They confiscated copies of the papers taken for distribution in the region and burnt them. 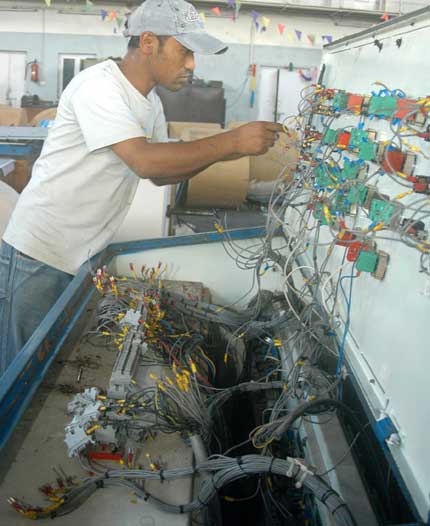 An employee at the printing press of the Kantipur Publications inspects the wires and control panel switches that were vandalized by the Maoist unionists. Because of this vandalism, both Kantipur and the Kathmandu Post, Nepal’s largest dailies, haven’t been published from Kathmandu. 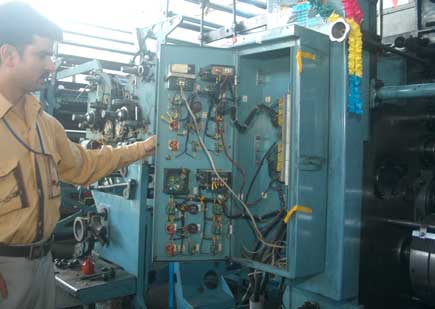 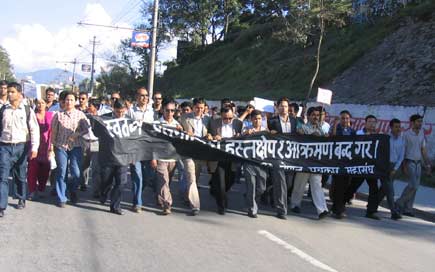 The rally (02 October) came at Maitighar Mandala and turned into a meeting. 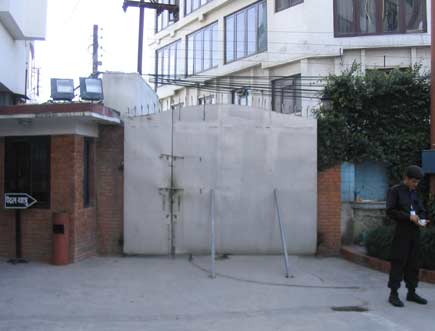 From inside the Kantipur Complex. The gate was closed as the Maoists were holding a meeting (02 October) outside issuing threats against the newspapers.

Meanwhile, Kantipur Publications has stated that the threat issued by the CPN-Maoist to close down Kantipur Daily and The Kathmandu Post forever and shut down Kantipur Television in the next four days in the name of their so-called “exposure program” against the Publications has drawn its serious attention. “The party’s public statement that the people’s right to information won’t be affected even if Kantipur Publications is closed down is extremely regrettable,” Chairman of the Publications Hem Raj Gyawali said in a statement issued Monday. “We are stunned by the remarks of Maoist lawmaker and Chairman of All Nepal Trade Union Federation, Salik Ram Jamkattel, who on Monday afternoon gathered his party cadres in YCL attire in front of Kantipur Complex and openly threatened to abduct and physically assault the Publications’ management officials and journalists categorically mentioning their names,” the statement added.

A team from Kantipur Publications including top management officials and editors and Federation of Nepali Journalists chairman yesterday visited the Prime Minister to apprize him of the latest on Maoist intimidation to the Publications. The PM assured them that he will not compromise on freedom of the press. Editors’ Alliance has condemned the attack on Kantipur.

A team of human rights activists visited Kantipur Publications yesterday. In the photo above, they are talking to editors of Kathmandu Post.

63 thoughts on “Free Press Vs Maoists: Updates on Kantipur Struggle”