Royal Nepalese Army attacked from air to the Moaists mass meeting at the Bagh Bhairav Secondary School, Thokarpa, Sindhupalchowk District killing at least four rebels and a civilains. UWB! blogger Bhojraj Bhat was covering the outlawed party’s mass meeting and saw everything with his own eyes. “Thank god,” he says after returning Kathmandu. “I am alive to tell the story.”

Maoists carry the corpse of their fallen comrade

One hour before the scheduled time, Maoists movement increased at Thokarpa. At around 11:30am, Varsha Man Pun (aka Ananta) walked towards the venue with his face covered by a handkerchief. Agni Prasad Sapkota (aka Kanchan) was accompanying him. A few number of them walked down from the school for the lunch.

Fearful civilians tried to keep themselves safe from the firing

Guerillas walk towards jungle after surviving the aerial attack.

A guerilla carries his female comrade who was injured in the attack.

Guerillas pose for the cameras

A woman (right) cries while watching the goats, all died at their places by the firing, as a Maoist watches in disbelief. Some thought that the goat on the right was alive. No, they were wrong. Near the goats lies the corpse of a fallen Maoist.

Maoists arrive at Thokarpa in this bus. Blogger/journalist Bhoj Raj Bhat is seen in the photo. He is holding a child (far left). 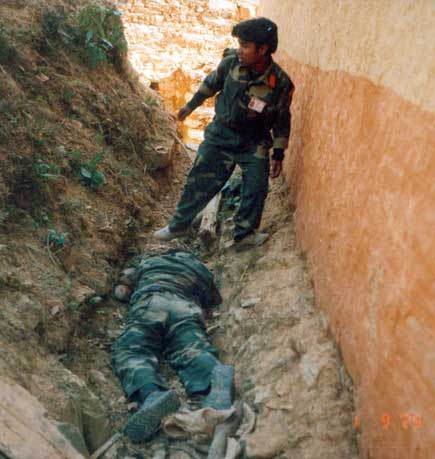 Died on the spot.

The dais wasn’t ready at the time and Ganga Karki (aka Biswo) was readying the forum for the program. Some militias were busy on decoration while others were bringing chairs.

At half-past 12, a bus arrived by Chehere of Sindhupalchowk. Number of the people increased. Half of the militia was eating when suddenly the sound of airplane was heard. Some said it was the regular flight while other suspected of army’s spying place. But when it started hovering at the school, Biswo and Govinda Batala (aka Jiwit) ordered to form the formation. They were carrying wireless sets which they used to instruct the militia.

Within five minutes, Army’s cheetah helicopter arrived and civilians started running away. ‘Journalists should be protected,’ a Maoist commander was saying. They kept a Nepali and a foreigner journalist with them and moved them towards the house near the school. Before Dinesh Shrestha of Maoists’ Janadesh weekly, a Japanese journalist and I were in the house, army opened fire towards us. Thankfully, the bullets didn’t find any journalists. A militia who was nearby was hit and instantly fell dead. Then we entered the house with a group of militia.

The Maoists were listening to the army’s communication in a radio at ’10 Band’. Four helicopters fired for around 90 minutes and then after there was silence. Militia started coming out of the houses they took as shelters and moved upwards with their bags. At that point, everyone was confused about other’s location. A militant told us that Ananta and Kanchan were safe and then only they started looking for injured. A militant was dead near the school while other was lying dead a little away. The Maoists took the corpses in stretchers and buried them in the nearby river bank.

There was around 1500 Maoists who searched for safe shelters. A woman in Lisung was brave enough to utter: “Khatri was killed as you sheltered in civil homes, please don’t do same to us.” But the Maoists militia denied her request and entered her house. At 5:00pm, when the Moaists believed of no more attacks and started carrying injured to the bus, a helicopter started firing again. Since everybody was inside the bus, nothing happened.

Sound of crying people was heard in the village above where Maila Khatri, 63, was shot at along with three goats. Khatri was alive but died within a few minutes. Then there was rush again as the helicopters reappeared after refueling.

At 5:30pm, the helicopter was grounded at the place of incident and army men stepped down. Maoists started firing from the other hill and there was exchange of fire throughout the night. All transportation from Chehere to Lauri Bhyanjang of Kavre was disrupted and on Tuesday morning too army helicopters were hovering around.

As the aerial attack began, Maoists and civilians started fleeing the program venue.

A plane (left) and a helicopter were seen hovering over the sky with soldiers firing from inside the chopper. 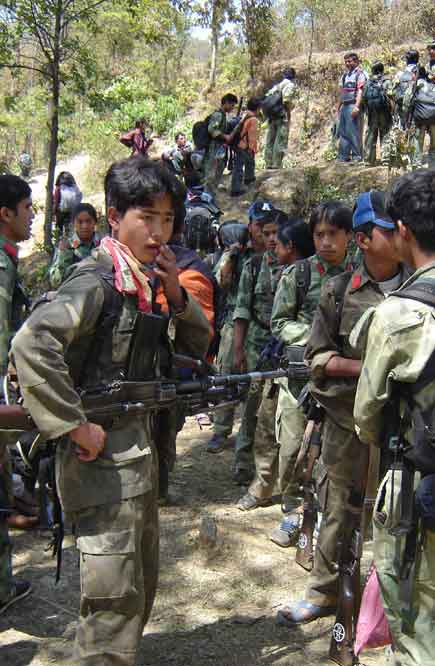 Guerillas before the program started (also the pic below)

Ladies do the flowery job

The area commander of the Maoists (middle) and Agni Prasad Sapkota, central leader of the party. The woman on the left is his relative.

Maoist leader Agni Sapkota gives a smile from inside the bus.

90 thoughts on “Live From The War Zone. Thokarpa Aerial Attack”