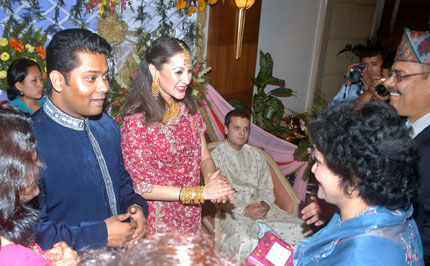 Sujata Koirala is the representative figure of neo-elite who enjoyed the freedom and state power misusing the power of her dad, the Prime Minister of Nepal, Girija Prasad Koirala. She is one of the most controversial figures in Nepali politics who is allegedly behind her father’s involvement in notorious Dhamija scandal involving the national carrier (Royal) Nepal Airline. Many people think that she is also responsible for promoting corruption and nepotism in the government while her father was in power for several years in democratic period in the 90s.

1. That is government should take action against Sujata Koirala (Jost) for she violated the local law by organizing the lavish ceremony.

2. Tax office should ask Sujata Koirala to provide details of the ceremony expenditure and she should tell Nepali public (as she is the daughter of the prime minister) the source of every paisa spent on the ceremony.

3. This government should stop the High Level Probe Commission from interrogating former royal ministers and officials because we are seeing people like Army Chief Pyar Jung Thapa happily shaking hands with those in the government. Those officials did the same as what Pyar Jung Thapa did: follow the orders of the king and supress the peoples’ movement. Since the government is too afraid to take any action against Thapa, the drama of investigating the atrocities of Jana Andolan 2 should be stopped. We need a break. -UWB

By Bikash Sangraula
The Kathmandu Post (For the record)

In Nepal, Marriage Is A Public Affair Where You Show Off Your Power and Property. Yes, Even If That Is Illegal. Because Who Can Touch An Army General Who Is Considered Above The Law?

General’s Juwai: On the marriage day: pic taken on Sunday, May 14. Pic by Todd Krainin

They say marriage is a private affair. But, not so in Nepal. Look at our own General Pyar Jung Thapa, the Chief of the Army Staff (who has just been recommended by a probe commission to be suspended from duty along with other chiefs of the security agencies for repressing last month’s historical Peoples’ Movement). But he has made us proud. We the people, among the world’s poorest, are awed by reading about the marriage of his daughter. We are so proud today that we have forgotten our poverty. How can we be poor when our chief of army staff can have such a grand and expensive marriage ceremonies in the city? We are now all wishing that we could be the chief of the army staff so that we can also have same kind of marriage ceremony for our daughters. We wish we were General Thapa so that we can have same amount of money. By the way, how much is the OFFICIAL salary of the Chief of the Army Staff in Nepal? Not more than Rs. 30 thousands. But how can he spend so generously and proudly? We wish we could know answer and apply the same formula to earn the money. And we are sure that such a formula would make every Nepalis rich and would win Noble prize for economics. END_OF_DOCUMENT_TOKEN_TO_BE_REPLACED