In Nepal, Marriage Is A Public Affair Where You Show Off Your Power and Property. Yes, Even If That Is Illegal. Because Who Can Touch An Army General Who Is Considered Above The Law?

General’s Juwai: On the marriage day: pic taken on Sunday, May 14. Pic by Todd Krainin

They say marriage is a private affair. But, not so in Nepal. Look at our own General Pyar Jung Thapa, the Chief of the Army Staff (who has just been recommended by a probe commission to be suspended from duty along with other chiefs of the security agencies for repressing last month’s historical Peoples’ Movement). But he has made us proud. We the people, among the world’s poorest, are awed by reading about the marriage of his daughter. We are so proud today that we have forgotten our poverty. How can we be poor when our chief of army staff can have such a grand and expensive marriage ceremonies in the city? We are now all wishing that we could be the chief of the army staff so that we can also have same kind of marriage ceremony for our daughters. We wish we were General Thapa so that we can have same amount of money. By the way, how much is the OFFICIAL salary of the Chief of the Army Staff in Nepal? Not more than Rs. 30 thousands. But how can he spend so generously and proudly? We wish we could know answer and apply the same formula to earn the money. And we are sure that such a formula would make every Nepalis rich and would win Noble prize for economics.

An Artist’s Impression: The Lavish Marriage Ceremony of Our General’s Daughter.

Let’s not talk about how the county is debating on the issue of bringing Royal Nepal Army under the control of Parliament because it’s the season of marriage and general is throwing lavish party. (yes, not only one but five parties) on the occasion of his youngest daughter Pragyashree Thapa’s nuptial. Let’s not disturb him. Lets not talk about reforms in the RNA. Let’s talk about the marriage. This will definitely diminish much-talked about Indian weddings such as billionaire Laxmi Mittal’s daughter’s wedding few years ago.

We Also Salute You General: You Have Shown Us A Great Example. We Wish We Were Rich Just Like You.

Coincidentally, the groom, Pratap Singh Rao, member of India’s former royal family, is coming by Jet Air. According to a report by Kedar Ojha in today’s Kantipur Daily, two five star hotels Soaltee and Hyatt are booked for the Indian guests. Thapa’s official quarters called Shashi Bhawan in posh area of Lalitpur is decorated to mark the occasion. Apart from the Who’s Who of Nepal, the King and Queen will give blessings to the bride and the groom. 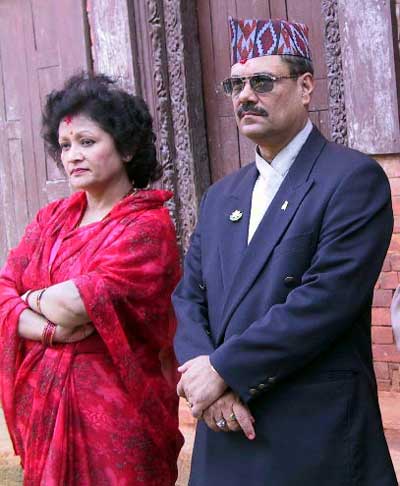 Yes, let’s also forget that in Nepal, there is a Social Conduct Law that restricts these kinds of extravaganzas in marriage and other family functions. But, as English novelist Charles Dickens said: Law is an ass. He could not be more apt in Nepal than anywhere else on earth. Because we firmly believe that thula and dhani le je garda pani hunchha, kanun ta nikukha haru ka lagi matra ho (Rich and powerful can do anything even if that is against the law because law is only for those poor folks who don’t have any connections.)

Congratulations General! No, we are not thinking about the law. Because, as Dickens said, that is an ass.