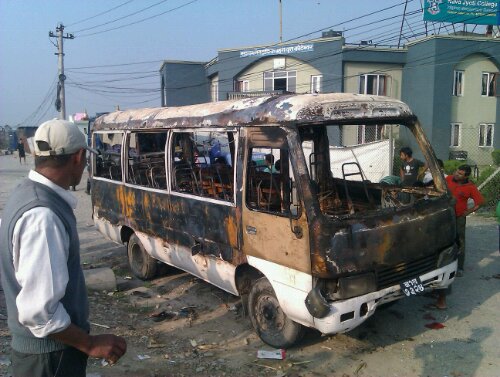 Kathmandu: A small group of criminals set a passenger bus on fire at the Manohara bridge early in the morning today (around 4:30 am). The bus was coming out from a garage in Balkot, Bhaktapur, to ply on the Nepal Yatayat route, according to my colleague Makar Shrestha who reached at the stop some 15 minutes after the incident. There are two Nepal Yatayat services- one begins from a planned settlement three kilometers away known locally as Town Planning near Old Sinamangal which itself is referred to as Pepsi Cola because the place hosts the factory of the cold drink major. The other begins from near Koteshwor. I am a daily passenger of the first Nepal Yatayat service. By the time I took this photo the bus had already been taken to Koteshwor traffic police post. Seemed to me that the engine hasn’t been destroyed.

I heard that some vandals attacked a van belonging to Kantipur TV. The attackers identified themselves as the activists of a fringe group called Chure Bhanwar Rastriya Ekata Party (presided by Himalayabhakta Pradhananga), according to a report in eKantipur.com.

This is the first instance of a bus being attacked in Kathmandu valley during banda (general strike) in many months. Today’s strike is called by a Hindu group that seeks to restore Nepal’s status as the world’s only Hindu country. But it seems they are not the only groups that have called banda today because Chure Bhanwar group has also claimed the ownership of the strike. Various outfits calling themselves Chhetri Samaj (a group of Chhetri communities) had also called for strike today only to take back that, according a TV network, yesterday.  –by DW

3. Kathmandu Valley Banda After a Long Time (Tweets, for the record)