“Let me share with you all a real life story,” said Amrit Gurung amidst his debut performance in Sydney on Saturday. “I was talking to a second generation Nepali immigrant residing in Europe. When I asked him if he liked visiting Nepal, he simply answered ‘no’. When asked why, he said – I want to go but I cannot communicate with anyone, even my grand parents. I really feel very frustrated, so I do not want to go” went on Amrit, the frontman of the band Nepathya. 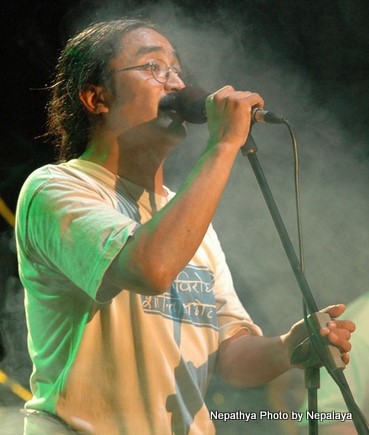 “I request all of you present here not to repeat this story. Please maintain our language. Our language is our identity and if you loose it, you will loose your identity and your connection with your motherland.”

Probably Amrit had spoken hearts of many present at the concert. The packed Science Theatre of The University of NSW, erupted in applaud.

Nepathya is in Australia for a 3 city tour and performed the first show on 3rd of Jan. As per many attending the show, this has been the best and the most powerful performance by any Nepali artists so far in this land down under.

“ I have attended many Nepali shows here but this has been an exceptional experience. It was great to see a professional performance and the connection it had with the audience. I will not miss the second show at Gaelic Club on the 10th as well,” said Om Gurung, a Nepali living in Sydney.

“ It has been a dream come true for me. The performance and response has been far above my expectation. As the organiser it was good to see people leave satisfied,” expressed Prem Kaji Gurung – President of Tamu Samaj Sydney, the local sponsor of the Nepathya’s Australia Tour.

Nepathya’s opening act – Mainapokhari Ghatana left all in a solemn mood. “ I could not stop my tears – to see what Nepal had gone through in recent years” said Sushma.

“It was a special moment for me to hear the audience sing all the songs with me. People observed both sorrow and joy with our songs.” Said Amrit.

After Sydney –Nepathya will perform in Brisbane and Melbourne before heading back home on the 20th of Jan. (From the press resease issue by Nepathya, the managers of Nepathya)

7 responses to “Resham! Nepathya Shares Sorrow and Joy with Sydney”