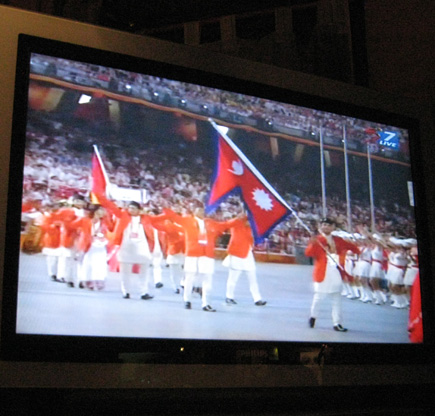 The Summer Games have begun in Beijing today in a spectacular fashion. This is one of those rare moments when the majority of the will be watching the same thing-on their TV sets- at the same time with, perhaps, the same emotions. The world is taking part in this grand ceremony of sportsmanship and celebration of humanity. Small or big, powerful or feeble, rich or poor, almost all people of the world are represented in the Games and everyone is so proud of that. It was one of those proud moments when I saw on TV the Nepali contingent marching inside the Birds Nest. Deepak Bista, the bearer of our flag, proudly led the Team Nepal on the world stage. That was quite a sight. One of my friends who was watching the opening ceremony in the Himalayan Java Coffee House in Thamel along with me screamed as he saw Deepak, our Taekwondo star, and the Team marching because he was so excited about the whole thing. Yes the medal tally will begin from tomorrow and ultimately the success of the participating country will be judged on the number of medals collected by their players but Olympics are not just able medals. President Hu Jintao of China is so right when he says this (at a luncheon with visiting heads of state earlier Friday): “The historic moment we have long awaited is arriving. The world has never needed mutual understanding, mutual toleration and mutual cooperation as much as it does today.”–by DW

74 thoughts on “One World, One Dream: Salute to the Olympic Spirit!”