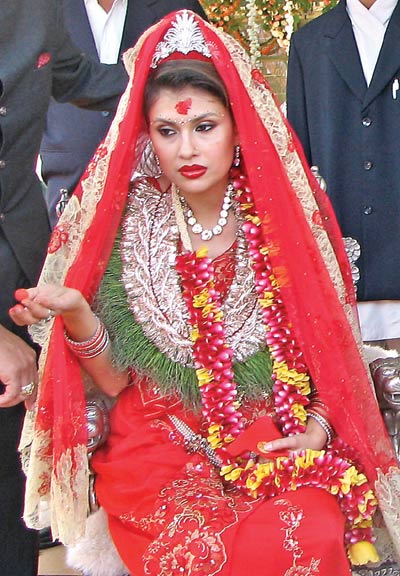 Devyani the Behuli (here is a big pic)

The name Devyani Rana still generates tremendous amount of curiosity in Nepal. “Devyani sanga bihe garna napayera Dipendra le testo gareko re!” People still whisper (these days they say it loudly because of the freedom that has come with the restoration of democracy in April.) People said all kinds of things about the almost mythical-like relationship of Dipendra and Devyani. She must be damn beautiful, people used to say, otherwise why would a MAN like Dependra go after her to that extent. Who is this Devyani, people used to ask. Pahsupati ki chhori re, some used to answer. While all these questions and answers were exchanged, Devyani never appeared in front of the Nepali public to present her side of the story. She vanished. Many thought poor girl, she became the victim of the “love web” of big folks in Kathmandu. Dependra Shah is a history now though he left many questions unanswered. Even the old Devyani is a history now. She will be Mrs. Divyani from today in a lavish marriage ceremony in the Indian capital. Here are images from her Swayamvar ceremony yesterday.

Here is a report published in TKP and Kantipur:Devyani Rana Becomes Behuli of Ashwarya

By Gopal Khanal in New Delhi

Devyani Rana, the heartthrob of late crown prince Dipendra, chose to make Ashwarya, a royal family member of Madhya Pradesh, India, her life partner by offering him a garland and a diamond ring, amidst a grand function held here on Thursday (22 Feb). At the Swayamvar Ceremony organized a day before the wedding, Devyani and Ashwarya exchanged garlands and a set of diamond jewelry as token of their vow to live together for the rest of their lives.

Devyani was clad in a red saree, while Ashwarya wore Ajakan, a specially designed dress for the bridegroom during the Swayamvar ceremony. The duo received blessings from relatives and held informal talks with their friends after they exchanged rings. Some 1,000 people, including Congress I leader Karan Singh, former British Ambassador to Nepal Keith George Bloomfield, Chief Minister of Madhya Pradesh Basundhara Raje Scindia and officials of various diplomatic missions based in India were present on the Swayamvar ceremony.

Devyani did not want to talk about her past. “I do not want to remember the past,” she said for the first time to the media after the royal massacre in 2001. “I am happy with the marriage.” Asked if she wanted to comment on her future, Devyani said, “I have a job at the United Nations. I will continue with the job. Appearing frail, Devyani showed no sign of the pomp and arrogance generally associated with aristocracy and Royalty, contrary to her upbringing in an elite Rana family of Nepal as well as the royal family of Gwalior.

Family members had arranged the marriage after Devyani, the youngest daughter of Rastriya Prajantra Party chairman Pashupati SJB Rana and Ashwarya made their marital preferences clear.