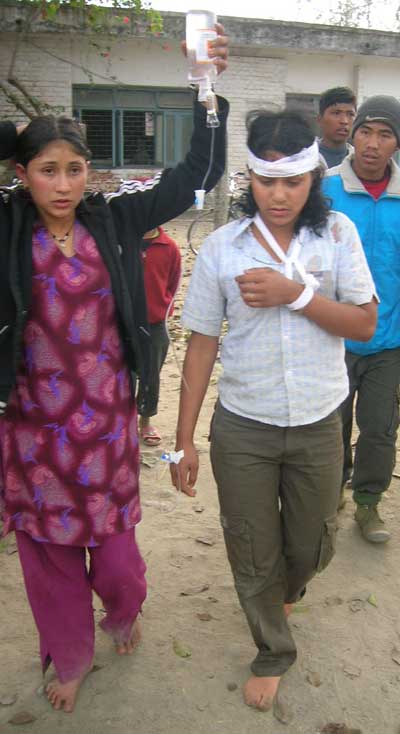 A Maoist cadre is taken to hospital in Bharatpur. She was injured in a clash with Madhesi Jajaadhikar Forum (MJF) Tuesday (6 Feb). 8 Maoist cadres were injured in the clash that took place in Parasi in the morning. Pics by Chetan Adhikari

A MJF rally in Parasi

Chinak Kurmi, a Maoist lawmaker in the interim parliament and Maoist district secretary in Nawalparasi after he was released by Madhesi Jajaadhikar Forum (MJF) Tuesday. MJF cadres had captured 18 Maoist cadres on Monday (5 Feb) at around 8 AM and released them at around 1 PM same day. Maoists had captured half a dozen Forum activists on Monday night.

Maoist affiliated workers’ union organized a lunch program in Biratnagar on Feb 6 where transport workers were fed dal bhat. Those workers were stranded in the middle of no where because of the ongoing strikes in Terai region. Pic by Bhim Ghimire

Children in Birgunj play cricket as the ongoing strike in the region is forcing schools to close. Pics by Subodh Singh

Rajkumari Devi, mother of Dipendra Sah who was killed during a demonstration in Birgunj, with Dipendra’s son in a rally organized by MJF in Ghantaghar Chowk on Feb 6.

Janakpur saw rallies throughout the day (6 Feb) against SPA and Maoist party on the 22nd day of the agitation in Terai. Pic by Shyamsundar Sashi