It’s Damn Cold Out There and People Are Dying

Four more people in Siraha died today due to the cold wave that has hit the Terai region hard in the last few days. The death toll in Siraha district alone has reached 9 till date, totaling to 22 in the eastern Terai. Though precautionary measures have been taken, because of improper management, the cold wave has been claiming lives in the Terai region everyday. However, the district police said that there is no data available on the deaths due to cold only. According to Kantipur, Jagdev Yadav, 70, Mahesh Mahato, 65 and Ramdev Kamati, 55 of different villages in Siraha died of the cold wave today. Similarly, Jhagal Majhi, 45 of Bara died Wednesday night. 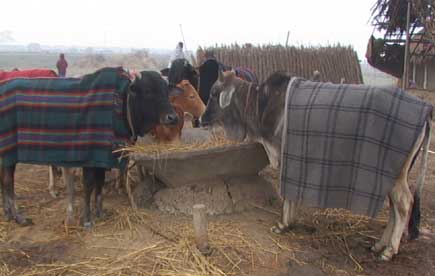 Due to the heavy fog that covers the region whole day has forced the elders to stay put at home, whereas the schools are seeing students in the classrooms in small numbers. With the mercury also falling down sharply along with the cold wave, minimal commercial activities have been noticed in the region. Earlier, three people had died in Rautahat alone due to the cold. The deceased were Chamelia Devi, Ram Lakhan Mahato, 85 and a yet to be identified 65-year old woman.

Previously, the cold wave had already claimed three lives in the same district. Likewise, due to the extreme cold, over a 100 primary schools have been shut down in the district. Three people have succumbed to the severe cold in Bara. Sushila Khatun, 28, Sahudari Devi Shah, 65 and Shah Dev Mahara, 50 have lost their lives to the cold wave. Earlier, an Indian citizen had also died in Bara due to the cold. Similarly the cold wave also claimed a life in Siraha where earlier five people had died due to the excessive cold.