Saturday Blog: Let’s face it, the singing and dancing and celebrations that you are seeing in these photos were in no way planned to coincide with the signing ceremony of the Interim Constitution of Nepal. That’s why there is something called coincidence. Evenings in Fridays are colorful but when it comes to day time in Nepal, Saturdays rock! As leaders of ruling SPA and Maoists put their precious signatures on the final copy of IC early in the morning today, boys and girls in Kathmandu, Biratnagar and Dharan started twisting their enviable waists. It can be argued that many of these bindas youngsters might not have an iota of idea about the IC. They might not have a hint that the prime minister of Nepal in the next (interim) government will be the most powerful after Mohan Shamser JB Rana. King will still be in Narayanhitti, unfortunately not in a cage like in Mohan Shamser’s time, but hey lets conclude that no person with self-respect would continue sticking to the powerless, in other word impotent, throne. I would have publicly (and proudly) renounced the crown and become the respectable citizen of the New Nepal. Can Gyanendra prove that is he is a son of a Kshetriya?

Boys and girls, give him a few days time (until the IC is promulgated) and, in the meantime, go to Tundikhel to experience the, ahem, not so great concert by a Pakistani band called Jal. 🙂 This report by Pawan Neupane aka Pawan Dev!

It seems as if Kathmandu’s rock music lovers are bound to return home half satisfied when it comes to gigs by Pakistani rock bands. When Strings was just about heating up the crowds at the Pulchowk Campus ground during its first concert in Nepal on a chilly October evening, the skies suddenly opened up and forced the much-hyped-and much-awaited concert to be scuttled right there and then. Another happening Pakistani rock act, Jal, also performing first time in Nepal, and expected to scorch the Tundikhel on Saturday afternoon, as it had successfully done on its tour across India. It didn’t rain this time, but blame it on the sound system as the audience, and everyone involved with the concert, must have been left less than satisfied again. 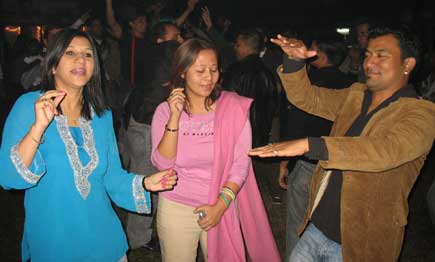 Jal opened its act with the mellow Teri Yaad at around 4:30 pm, followed by the massive hit Woh Lamhay that had the whole audience backing Jal’s vocalist Farhan Saeed Butt all the way through. It was surely a hit with the audience. Then came the number Ik Din Aayega, after which Farhan told the crowd that they would return after two minutes after fixing the sound settings. This however, took more than 15 minutes before the band took to the stage again. Jal’s second phase started with the cover of the song Lal Meri Pat, which was followed by Rangon Mein. Up next was Dil Haarey, during which the band also sang snippets of old Hindi film numbers – Kya Hua Tera Vaada, Kabhi Kabhi and Yeh Dosti, which Jal dedicated to the friendship between Nepal and Pakistan.

Beautiful girls in Rangeela mood in a Jal concert in Tundikhel

All this while, the problems with the sound system persisted as it continued to produce strange, disturbing sounds making it difficult to hear the band properly. Jal finally wrapped up the concert with its two most popular hits, Woh Lamhay, a fast-paced version this time, and then Aadat.

Before Jal, the audience was entertained by two Nepali bands also. X-Mantra, the Nepali heavy metal band, as always made for some head banging time with its numbers like Makurako Jaalo, Khaate and Haami Dherai Saana Chhaun. After X-Mantra, rock group 1974 AD took center stage and enthralled its fans with around a dozen songs for around an hour. The group’s performance included songs like Pijadako Suga, Pahilo Junima, Aappa, Yo Mann Ta Mero Nepali Ho and a song called Aaja Bholi from its new album On Air. 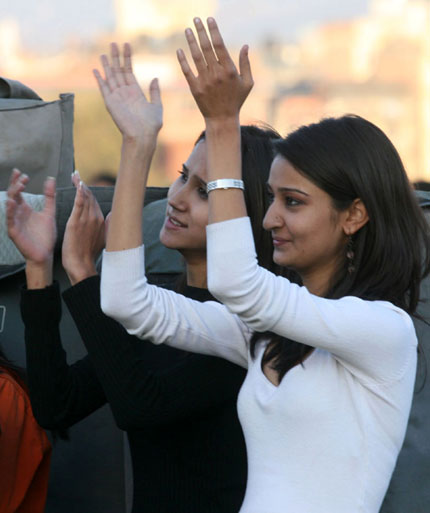 Clapping to the wonderful performance? In Tundikhel

The live concert, entitled Winter Warm-up ’06, was organized by The Kathmandu Mall in sponsorship with Plantain IIFT and was managed by Rings Live Entertainment. Better luck next time for Jal’s fans. In the meantime, they can wait for the band’s next album Payal releasing in March, 2007 and also hope to see the band play live in the city soon again.

20 thoughts on “Time for Music and Masti in Nepal: Shake Your Bum!”