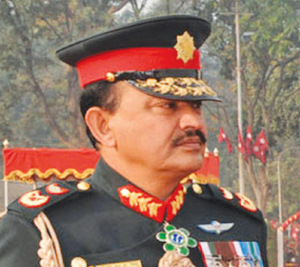 In a controversial move that has angered many including some western donor countries and agencies, the government today (Thursday) promoted Maj. Gen. Toran Jung Bahadur Singh as Chief of the General Staff, the second-in-command of Nepal Army. The government had put the promotion on hold for six months in view of mounting pressure from the international community as well as local and international rights groups. The major donors—the US, the UK and other EU countries—and UN human rights agency OHCHR had demanded Singh’s suspension, pending investigation into allegations of involvement in the disappearance of 49 detainees from the Army’s Bhairavnath Battalion in 2003-04. The Cabinet move comes five days after Chief of the Army Staff Chhatra Man Singh Gurung returned from his official visit to India.

Americans unhappy: The international community, especially the US and OHCHR, have expressed serious concern over Gen. Toran’s promotion. The US Embassy in Nepal has cautioned the government over its decision, adding that it could have an impact on the US assistance to the Army. “It (Toran’s promotion) could have an impact on the US assistance to Nepal Army,” said Information Officer at the US Embassy Nicole Chulick. “We’ve seen local press reports on Toran’s promotion. We have repeatedly expressed our concern about the promotion to Nepali government. We also want to stress that our concern is not about one individual, rather all the human rights abuses that were committed by the Maoists and the Nepal Army during the decade-long conflict. These abuses need to be thoroughly investigated and those abusers held accountable.”

OHCHR is also unhappy: “OHCHR’s position since 2006 has been consistent — those implicated in human rights violations committed by members of the 10th Brigade in 2003 and in 2004, when General Singh was in command, should not be promoted pending completion of a full, transparent and impartial investigation,” said Representative of OHCHR-Nepal Richard Bennett.

But Defense minister is happy: “Singh’s promotion is part of the regular job. There is nothing to object,” Defence Minister Bidhya Bhandari told reporters in Biratnagar, following the Cabinet decision. “There is no case pending at the court against him and we can’t prevent anybody’s promotion just based on allegations.” Bhandari and Nepal Army had been constantly lobbying with Prime Minister Madhav Kumar Nepal for Toran’s promotion. According to a government source, the government took the decision despite warnings from some of the P-5 countries – permanent members of the UN Security Council. Envoys of the US and the UK had registered their differences during a meeting with Prime Minister Nepal on Wednesday, when they were informed of the government intention to promote Singh.

Then there is ‘Major controversy’

National Human Rights Commission (NHRC) has taken strong exception to Nepal Army’s decision to form a Military Court of Inquiry to deal with allegations of human rights violations by Maj. Niranjan Basnet. NHRC has said neither the Army court nor the so-called Maoist People’s Court has jurisdiction to hear cases of serious human rights violations such as those related to the murders of Maina Sunuwar and Ram Hari Shrestha.

While Maina, a 15-year-old girl from Kavre, was allegedly tortured to death in Army detention under the command responsibility of Maj. Basnet in February 2004, Shrestha was allegedly abducted and killed in May 2008 by PLA commander Kali Bahadur Kham. Neither the Army nor the Maoists have taken any action against the accused. Instead, the Maoists promoted Kham in the party heirarchy and the Army sent Basnet to a UN peacekeeping mission in Chad after giving him a clean chit. The UN, however, deported Basnet to Nepal earlier this month in view of the allegation.

“NHRC draws the government’s attention to the need to try the cases of Maina Sunuwar and Ram Hari Shrestha in civilian courts because they are related to serious human rights violations,” said an NHRC statement today (Thursday). NHRC maintains the government should respect the Supreme Court order and produce Basnet before the Kavre District Court, which has issued an arrest warrant in his name.

Meanwhile, Maina’s mother Devi Sunuwar has urged the government to hand over Basnet for trial. “I am deeply hurt by the dilly-dallying of authorities in handing over Basnet,” said Devi at a press conference at Nepal Bar Association today (Thursday).  She also appealed to civil society, the media and diplomatic missions to press the government to prosecute Army officials—Maj. Basnet, Col. Bobby Khatri, Captain duo Sunil Prasad Adhikari and Amit Pun, all allegedly involved in the murder of her daughter—in a civilian court. She claimed she had received threats asking her to withdraw the case. Devi said she has also been offered money and a house in Kathmandu.

5 thoughts on “Controversial Promotion of the Year: Toran Singh is No. 2 of Nepal Army”