An article by Dinesh Wagle in Kantipur (7 Aug) on Mahabir and Magsaysay: महावीर र म्यागासेसे
……
Mahabir Pun who established wireless computer networks in the highlands of Myagdi district wins this year’s Magsaysay Awards 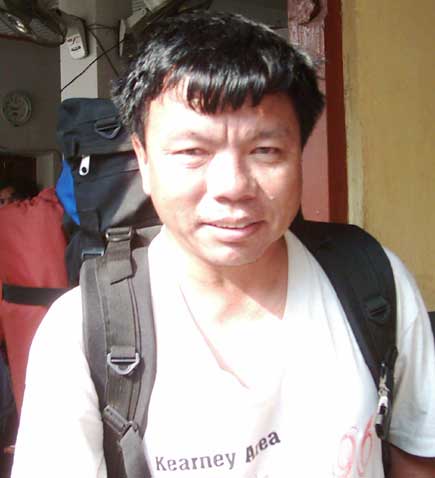 A trekker with a mission: Mahabir Pun is the man from Myagdi that has the famous Ghorepani village of the Annapurna trekking route. Thanks to Pun, the area is now connected to the world via wireless computer networks. Pic by Ghanashyam Khadka

Kathmandu- When Mahabir Pun returned to his birthplace after 24 years with an American degree, his own relatives in Nangi village of Myagdi district didn’t recognize him. That was in 1992. Since then he has connected the villagers to the rest of the world by establishing wireless computer networks in the hills and there is no one in the region who doesn’t know about him. On Tuesday, the world knew about the 52-year-old Nepali social development worker: Pun won this year’s prestigious Magsaysay Awards which is regarded as the Noble Prize of Asia.

The Board of trustees of the Ramon Magsaysay Award Foundation (FMAF) decided to honor Pun with the US $ 50,000 prize for “his innovative application of wireless computer technology in Nepal, bringing progress to remote mountain areas by connecting his village to the global village.”

“I just do my work and if anyone says it’s good that’s fine,” said Pun after learning about the honor. He left his village for Chitwan to see his ailing mother. When Pun was a primary school student, his father, a retired soldier of the British Army, migrated to lowlands to provide better education opportunity to his son. 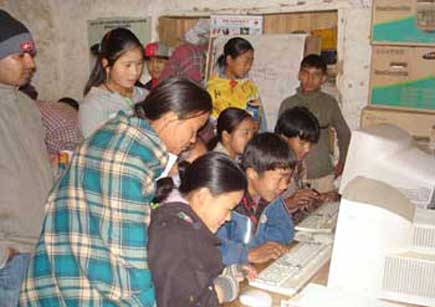 Pun has said that lack of government laws to regulate the wireless technology that he is working on is the major challenge for the expansion of the project. “The biggest challenge for this project is to find ways to work in the absence of flexible government law,” Pun writes in his website. “Technically, we are running this network illegally because we have not gotten license that the government of Nepal requires. We have been trying to get the license for one year. Whenever we ask the government to provide license they are asking us to wait until they bring a new regulation. We don’t know yet what the new regulation is going to be like.”

Without license, Pun said, he can’t import the equipment legally. “Therefore we have to ‘import’ the Wi-fi radios and antennas ‘somehow and someway’ from foreign countries,” Pun stated. “Sometime we have to wait for several months just to get a small piece of equipment.”
Pun was in Kathmandu last July to tell the parliamentarians and political leaders about the project and explain them how the Wi-fi technology could be used for the benefit of those living in the remote areas of Nepal. 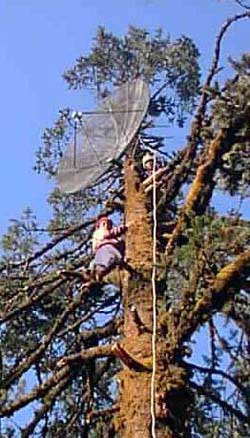 The wireless tree: Dish Antennas are hanged on the trees.

Pun who finished School struggling with financial restraints had started to teach in a school instead of continuing higher level studies. After 12 years of teaching, he got the opportunity to get admitted in the University of Nebraska at Kearney in partial scholarship. While in the University the idea about going back to his ancestral village came to his mind.

Today schools in seven villages of Myagdi including the one in famous Ghorepani of the Annapurna trekking route are connected to rest of the world via computers that communicate with each other though wireless network powered by the dish antennas hanged on the trees. The Himanchal Higher Secondary School in Pun’s own village Nangi can be taken as the hub of the pioneering network. “Today, connectivity is changing Myagdi,” the Board of Trustees of Magsaysay says in its citation. “Using the district’s ‘tele-teaching’ network, good teachers in one school now instruct students in others. Doctorless villagers use Wi-Fi to consult specialists in Pokhara. Village students surf the Net and are learning globe-savvy skills. Pun himself is using the Web to e-market local products such as honey, teas, and jams.”

It had been 24 years since he left the village when he returned to Nangi with a bachelor’s degree from America in 1992. “Nobody recognized me in the village by face,” he says. “I introduced myself to my relatives and villagers. For a couple of months the villagers thought I was having a vacation. When I told them I would help them to teach in the [Himanchal] school they couldn’t believe it. However, my activities that followed for helping finally made them believe I was serious.”

Thanks to his efforts to bring in volunteers and other assistances from abroad, Himanchal School got two personal computers and a laptop from Australia’s Billanook College. After seeing those computers, Pun dreamed of the wireless network. “Our dream then was to have the students of Billanook College and Himanchal High School communicated with each other through e-mail,” he writes. “That dream did not come true instantly. The main reason was that there was no phone line in the village to connect to the Internet.”

But Pun didn’t give up. He kept on asking people for ideas and wrote a very short e-mail to the BBC in 2001, asking if they knew any body who could give him ideas (if there were any) to get a cheaper Internet connection cheaper to his village in Nepal. Well, the BBC guys didn’t have the idea but they provided him more than that. They interviewed him and posted that in the website: “Village in the Clouds Embraces Computers”

“That article changed everything,” Pun writes. “I got many responses with ideas from people all over the world. That was the first time I heard about 802.11b wireless technology.”

As a result of the BBC article, two volunteers from Belgium (Johan Verrept) and Finland (Jonni Lehtiranta) reached Nangi in early 2002 with two Cisco PC Wireless Cards that were donated by IBM Finland. They did several experiments in 2002 with the wireless cards to test the connection between two villages, Nangi and Ramche, which are about one and a half kilometers (about a mile) apart across a river valley. The test was successful and the rest is history that has made Nepalis proud.

The other six personalities to receive this year’s Magsaysay are from China, India, Korea and the Philippines. Pun is the fourth Nepali to get the award (he has been awarded under Community Leadership category). Dr. Sanduk Ruit of Tilganga Eye Center in Kathmandu won the award last year. Before that, journalist Bharatdutta Koirala and researcher on land management Mahesh Chandra Regmi have own the award.

(The Nepali version of this article appeared in today’s Kantipur)