Thanks to the ongoing peace process in the country, police have returned to villages to provide sense of security to people. 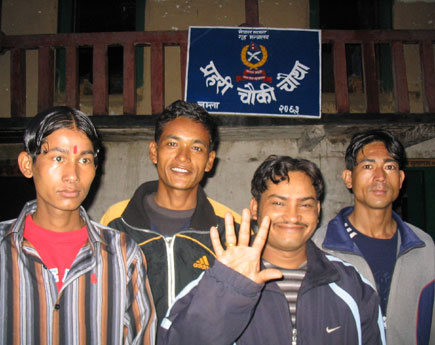 Chautha (Jumla): In an evening a week ago, beautiful tune resonating to that of a mouth harp was heard in this corner of a remote village of Jumla that doesn’t receive the short wave signals of Radio Nepal. Following the tune, this reporter reached a house that had a sign board hung on its front which read ‘Police Post Chautha’. After entering inside the room on the first floor with permission, a young man was seen playing with a keyboard, not the harp. A few of his pals were readying themselves to go to bed while humming folk tunes.

“It’s a very boring place, sir,” said Kali Bahadur Rawal of Nepalgunj who was fiddling with the ‘MS 200 A’ instrument with 37 keys. When they are off the duty, not meditating the villagers’ feuds or not in rescue mission, police in this ‘boring’ place take refuge to music to entertain their soul. “Madal and Keyboard are [our] entertainment,” said Head Constable Dhana Bahadur Khadka who is leading the office as the post of Assistant Sub Inspector is vacant. Entertainment is only half full this evening as the traditional Nepali drum (madal) has been taken to a nearby village.

Job of a policeman, duty in a corner! Thanks to the ongoing peace process in the country, police have returned to villages to provide sense of security to people. Amidst the fear of looming Maoist attack, this post was vacated some three years ago and was reestablished four months ago. Policemen here are full of stories of clashes while the hope of sustainable peace could be seen floating in their eyes. “I fought in Rolpa,” remembered Kali Bahadur who was fiddling with the instrument without knows how to play it in the absence of his colleague Netra Bahadur Kuwar of Rolpa who knows about the keys. “Twice. After the Hapure talks failed. Fought bravely. Without eating for two and half days.”

He wasn’t injured but is sad that “many friends got martyrdom.” He is equally happy about the peace process. “I am elated,” he said. “I wish we don’t have to fight with our brothers.” Shalikram Mahatara of Rolpa, who was singing ‘Chhin ko chhinaima/Hit ko maya ke bhani bolaunu pahilo bhetaima’ before the conversation, talked about the intimacy that they have developed with their former enemies. “Maoist cadres and we eat in the same plate.” Kali Bahadur added: “We walk together like brothers. I don’t know what happens in future.”

The main responsibility of police here, who are out of the district police communication network as walkie talkies don’t catch the frequency, is to meditate in locals’ disputes. A home on the upper side of the village was swept away by an avalanche soon after they arrived. Villagers still remember the role played by police in rescuing. “These guys took out a man alive (from the snow) after six hours,” said a local shop owner Sukbir Bhandari. “It’s definitely good to have a police post in the village.”

10 thoughts on “Job in Nepal Police, Duty in a Corner”