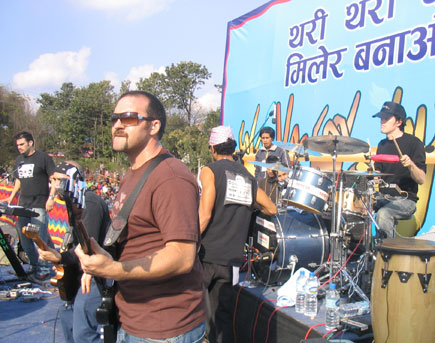 Oh… Khulamanch (open air theater) what a fate you have! A day before Valentine’s Day, you hosted a spectacular show titled Huge Mass Meeting in which a formerly terrorist outfit that is now days away from joining the government made public its leader after 25 years of underground politics. Other than the almost two hour long speech of Comrade Prachanda, the Nepal Communist Party (Maoist) Chairman, the program saw international communist song and other pro-people songs performed by former guerillas. Three days after that historic day, another history was made in Khulamanch when an award winning American band performed, probably for the first time, in a vibrant concert that was organized by the diplomatic mission that still thinks the Maoists are the terrorists. I am sure this equation will soon change but, after taking part in both events, here is my impression: People limited themselves in clapping in the previous event where as participants danced, screamed, sang, hummed, and, what not. After all, musical concerts are always more lively and fascinating compared to the political gatherings all over the world.

Multiethnic Los Angeles band Ozomatli is in town under the auspices of American Center in Kathmandu and USAID/Nepal. It was definitely a wonderful opportunity for the roaring crowd of Kathmandu youth to be in Khulamanch today to be part of Ozomatli performance. With the sharp words of “music makes you loose control” from loud speakers appeared the band members on the stage. “Hoie,” the crowd welcomed them. “Justin Poree, who had tightly covered his curly hairs with a slightly (and apparently intentionally) torn dhaka topi (traditional nepali cap) grabbed the mike and started singing “City of Angels.” Wil-Dog Abers wanted to introduce his band to the Nepali crowd in their language: “Hami Ozomatli Los Angeles Bata! [We Ozomatli from Los Angeles]” That was a pleasant surprise to hear him introduce the band that way. Yesterday, I had taught him the sentence and he learnt that well. Are you enjoying Cat Man Do? The answer from the crowd was loud and clear: Yeeesssssssss!! To be among the crowd at that moment was indeed an electrifying experience.

No I don’t know who is she and I didn’t ask as she was behind that fence and was dancing in her own world. My camera tried to catch her in various musical moods. 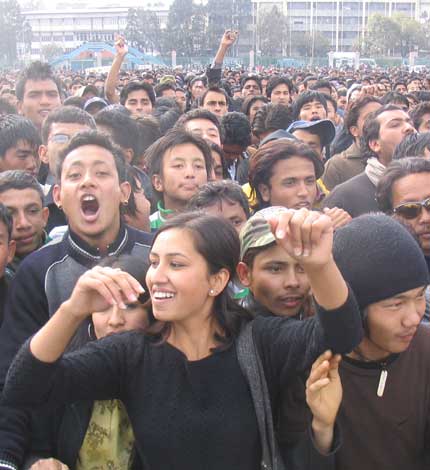 I could easily sense that the American Center in Kathmandu had associated the smooth organizing of the program with their prestige. Sometime the crowd turns ugly but there was no such problem of hurling bottles and stones on the stage today. Boys and girls were too busy in dancing to do any such things. And Robert Hugins, the director of the American Center in Kathmandu, was enjoying the concert thoroughly. Clad in jeans and cap, he reminded me of the American image of cowboy. In a quick conversation, the 53-year-ld American remembered his youthful days when he used to go to open concerts like this with his friends. “I used to go when I was young,” he said. “Hanging out with friends. If you like music, you want to attend the concert of your favorite band.” He remembered attending a musical event with his nephew some two years ago.

She is Mandira Thapa, a member of Rotaract Club of Dillibazar. She was with her friends Anisha, Sanju, Manju (did I hear that?) et al. These girls (below) were having a blast in the concert. 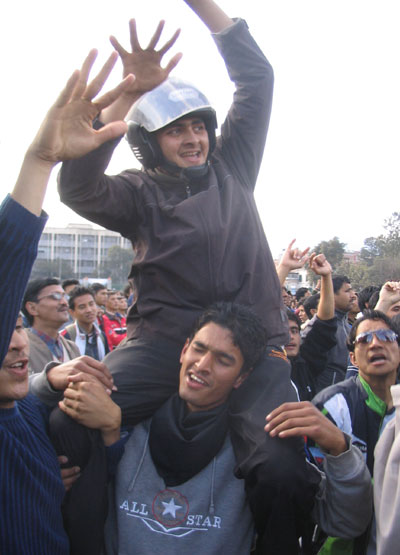 These folks are from the same Rotoract Club. They were carrying each other on their shoulders turn by turn and were dancing. In the photo above, 22-year-old Ameer Banjara is seen carrying 21-year-old Prabodh Pandit on his shoulder. In the photo below, Prabodh shoulders Ameer. Yes, it was slightly difficult to dace while carrying a person on shoulder but they were having fun.

17-year-old Rabindra Sapkota, originally from Hetauda and a student of Amrit Science College (ASCOLL) was in Tundikhel with his friend. “Good,” he said hurriedly as he was busy in dancing. “I danced a lot.”

Capturing the crowd in her camera!

Not just the boys and girls but the organizers were dancing too. Reporters and representatives of FMs and TVs were also dancing in the tunes of Ozomatli. “Everybody put your hands up!” The musical order from the state was sincerely obeyed by the crowd. The crowd was waiving hands and Tundikhel became full of hands. “Sing with us,” was the request from the stage. “Oh Eh Baby!” The crowd roared: “Oh Eh Baby!” The band sang: “Oh Eh Mamma!” The crowd repeated: “Oh Eh Mamma!” Let me not pretend of understanding everything they sang. Catching them singing English was difficult; there was no way the crowd could get the Spanish song. But hey, do you really need to know the language to get hold of the music? Don’t they say music itself is a language, an international one? Yes, the crowd was thinking the same. 22-year-old Ameer Banjara was holding 21-year-old Prabodh Pandit on his shoulder and both were dancing. A minute ago, Prabodh was holding Ameer on his shoulder. “Ozomatli is the best,” screamed a super excited Prabodh. “Ekdum daami,” remarked an enthusiastic Ameer about the concert. “Jhakas.” [Very worthy of attending and it’s colorful.] 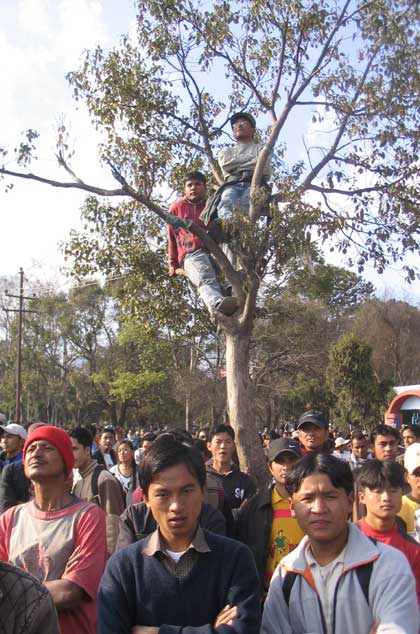 If the performers are from a Monkey Band (the meaning of Ozomatli), why not the audiences do some adventure?

Policemen (below) and security guards worked hard and smart to put the super excited audience away from crossing the fence. The crowd behaved well.

These two girls were quietly enjoying the show.

Here comes the baje to enjoy the concert.

These two boys along with their other friends from a club in Dillibazar soon started dancing holding each other’s hands and forming a circle. A girl quickly grabbed my ID card provided by the organizers and made sure I was actually the one who I was claiming to be: a reporter from Kantipur in the middle of dancing youths. She was also from the same group. 17-year-old Rabindra Sapkota, originally from Hetauda and a student of Amrit Science College (ASCOLL) was in Tundikhel with his friend. “Good,” he said hurriedly as he was busy in dancing. “I danced a lot.”

Surrounded by Maoist posters featuring their Chairman Prachanda, boys and girls quietly enjoyed the show. Many of the guys who were standing far from the stage didn’t dance but, like these girls below, occasionally clapped and tapped their toes. 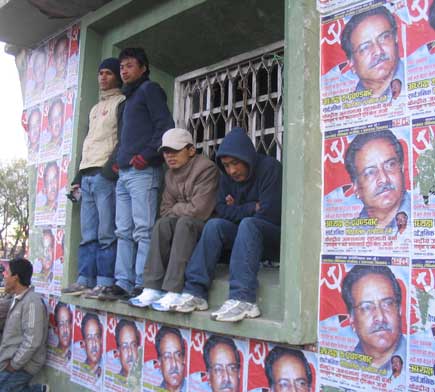 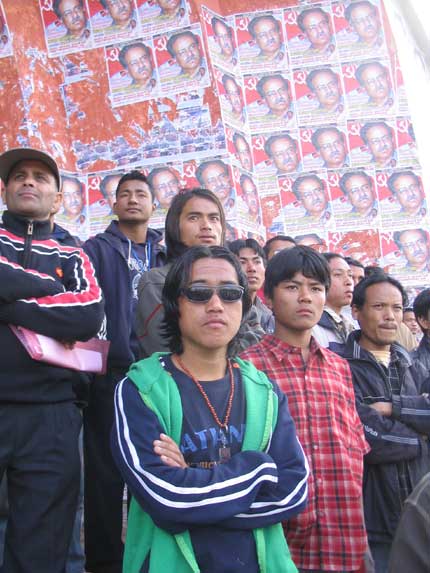 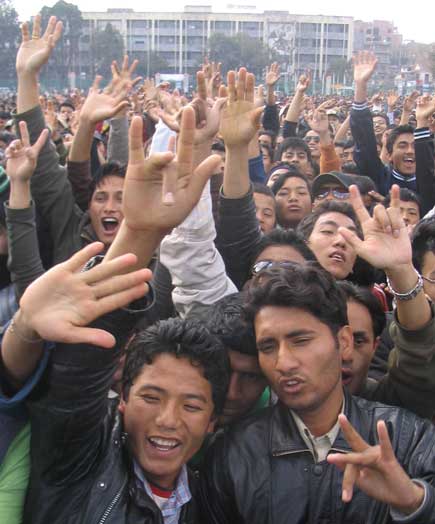 “Everybody put your hands up!” The musical order from the state was sincerely obeyed by the crowd. The crowd kept raising their hands and shaking their bodies.

The band LA “monkeys” sang half a dozen songs before packing up. But the “Once More” request kept coming from the crowd. How was the performance in Nepal? “Awesome,” quickly remarked Ulises Bella before going back to the stage. “It was great.” Again the song and dance session continued for several minutes. “We did perform in India but Nepali crowd is great,” Jero Yamaguchi told me as he came back to the backstage. Wil-Dog added: “This is one of the unforgettable even for us.”

A Video from the concert.

35 thoughts on “Ozomatli in Nepal: Music Makes You Loose Control!”