After witnessing so many histories created in peace process in recent months, it was time for the residents of Kathmandu to witness a history created by mother nature today.

When the snow touched Kathmandu after 62 years on Wednesday, Krishna Bhakta Manandhar was among those who were caught by surprise. The senior officer at the Meteorological Forecasting Division of the Ministry of Science and Technology knew it would rain in the valley and many hilly regions across the country would experience the snowfall. But he had no hint of snowfall in Kathmandu. “This is surprising,” he said of the sudden natural development that forced many in Kathmandu to stay inside their homes. “No snowfall was expected in Kathmandu.” A measurement device of the Division installed in Kathmandu’s International Airport recorded the snowfall for about 45 minutes there where as in other parts of the city experienced it from a few minutes to half an hour depending their altitude. The snow vanished immediately after touching the soil because, Manandher said, the temperature of Kathmandu at that time was too high (4 degrees Celsius) to remain unaffected. Manandhar’s office is not older than forty years but he said that the last time Kathmandu saw snow was 62 years ago: BS 2001 Poush 23.

The drizzling rain in the morning gave many youngsters a reason to be romantic who were planning to celebrate Valentines’ Day but there was no hint of snowfall. (A Nepathya number ‘akashai bata ke udi aayo bheda ko oon jasto” that describes the snowfall just like the one that Kathmandu has also become popular in the past years in Nepal.) Mobiles started buzzing and the Short Text Message traffic suddenly increased among youths as the snow started hitting Kathmandu soil. The network circuit was too busy to handle the traffic and Nepal Telecom started giving this message: all circuits are busy, please try again. Even the voices were broken on wireless phones as if the sudden cold had some impact. 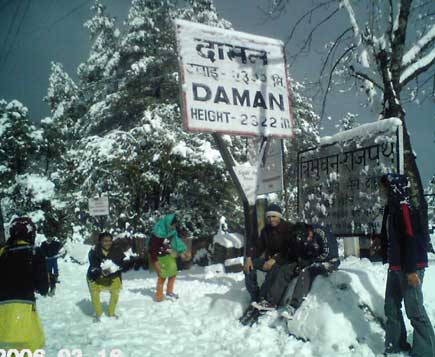 In Daman by Pratap Bista

“I am having heavenly experience,” read a message sent by a girl. “I am at the top of my house.” In an interview later, she said that that was her first experience with snow and compared the scene with that of stars falling from sky. “Romance is related to nature,” she said moments before discussing about “Snow Falling On Cedars”, a novel, in the Valentine’s evening. “I experienced three avatars of nature in a single day.” After the rain in the morning and snowfall in the afternoon, many parts of Kathmandu saw bright and sunny evening. Seizing the opportunity, many Kathmandu youngsters had gotten out on the streets while many went to restaurants that were specially decorated for the occasion.

And those who were probably not satisfied with a candle light dinner were heading towards Nagarkot where this was third time snow had fallen in the past eight years. Snow was as high as one and half feet. “It was very cold early in the morning,” said Bikash Shakya, residential manager of Club Himalaya, a resort situated at the hill. “Warmth returned after it started raining. White water started falling at around 12. Within half an hour, snowing started.” Lovebirds had booked 80 percent rooms in Nagarkot hotels for the Valentines’ Day but the snow pushed the booking to cent percent, Shakya said. The unexpected business increased in such manner that Shakya not only had to cancel the Valentines’ dinner with his wife but also couldn’t be with her to celebrate her birthday. “I sent her an email early in the morning,” he said. “Later I called her and wished happy birthday and Valentines’ Day. I also sent her an SMS.” Shakya hopes that the snow will remain for the next two days in the popular tourist destination at the altitude of 7133 feet. Terming the snowfall on the Valentines’ Day a fortunate coincidence, Shakya hoped to see a brisk business in Nagarkot because of lovebirds wishing to stay in the town to enjoy the snow. “There were no activities happening in Nagarkot recently,” he said. “Thanks to the coincidence of Valentines’ Day and snowfall, there are more guests in hotels here.” 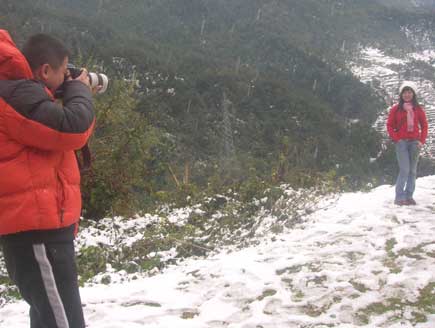 Smile with the snow!
A foreign couple in Lumle, Pokhara. by Prem Nepali

The arrival of snow on the soil of Kathmandu that is situated at the altitude of 4500 feet definitely qualified for breaking news in Television stations but there are more than one opinion regarding the exact date of last snowfall in Kathmandu. The web site of Meteorological Forecasting Division states that snow felled in Kathmandu in BS 2001 but Mahakavi Laxmi Pradad Devkota and litterateur Shyam Das Bainswab might beg to differ. Devkota’s “Tusar Barnan”, published three years ago, states that Kathmandu experienced snow in BS 2003 Poush. “Mahakavi had sent Shyamdash to buy meat on that day,” said Dr. Padam Prasad, son of poet Devkota, about the 32-page book with 224 verses. “He started writing on that evening and finished the book on the same night.” The book, Dr. Devkota said, is all about images: cultural and political and many are in one way or the other related to the snow.

26 thoughts on “Another History in Nepal: Snowfall in Kathmandu On a Romantic Day”