A photo blog: First public meeting of Nepal Communist Party (Maoist) that was addressed by their Chairman Prachanda. By Dinesh Wagle

Maoist affiliated girls on the back stage put on make up and do their hairs before going on the state to perform dance. The show clearly belonged to Prachanda because it was organized specially for him. Maoists wanted to make it high sounding and portray the event as a really big thing. They also wanted to portray their leader Prachanda as the Next Big Thing in Nepali politics. Krishna Bahadur Mahara’s introductory note, two minutes before he invited Prachanda on the mike, were full of adjectives and praises for Prachanda. I mean even Prachanda must have felt uncomfortable with such words. All central members of the party seated on the dais were presented with a garland of marigold except Dr. Baburam Bhattarai and Prachanda. Dr. Bhattarai had two garlands where as Prachanda had three. Prachanda removed the garlands a few minutes before taking on to the mike.

A small banner just above the big banner above the dais had prints of 12 pairs of hammer and sickle symbolizing the obvious: the peoples’ war entered in 12th year today. Two bodyguards instantly came to the mike as Prachanda headed towards it. Prachanda started the speech unexpectedly less radical way. His starting in Baluwataar when he first appeared in front of the press was far more impressive. “How many are there?” I asked to a Maoist cadre who was closely monitoring the activities below from the top of a building owned by Nepal Electricity Authority. Instead of replying, he fired back the question to me. “Well, this is definitely one of the biggest,” I replied. “It could have been even bigger,” said the Maoist, “if we could have secured that space for the meeting.” He was pointing to the other side of Khulamanch, the Army Dais. “They said they have their own programs. We couldn’t bring more people because there is no enough space there in Khulamanch.” There was no doubt not all people who were attending the mass meeting supported the Maoist party. Some were brought there forcefully and some were there because of their curiosity.

A Maoist girl from Dolakha with a guitar. She said she learnt to play the instrument by seeing others play it. She also said she didn’t’ attend the college after doing SLC (in second division) because she wanted to bring about change in Nepali society through ‘great peoples’ war’. “No the war hasn’t ended yet,” the daughter of a man who, she said, was killed by the Army three years ago, remarked. “Only the form has changed. We will continue fighting because there are still so many poor in Nepal.”

A woman, in her traditional Sherpa cap, heads toward the stage to demonstrate the culture along with her comrades. 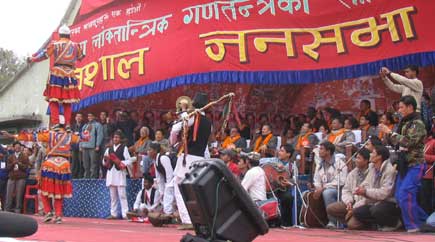 I could see Prachanda thoroughly enjoying this particular show from Seti-Mahakali region. A performer is standing on the shoulders of another and entertaining the comrade with garlands. 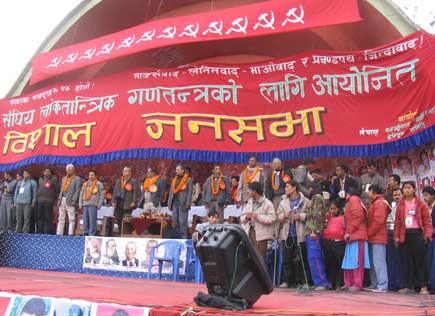 Maoist leaders seated on the dais stand and hum in the tunes of an international communist song. I noticed Prachanda moving his lips initially but as the song went further he stopped doing so and kept on inspecting the crowd. 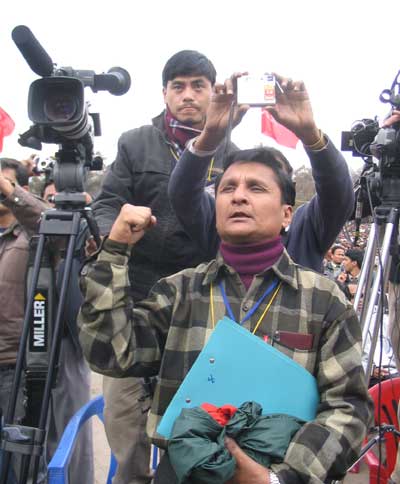 But this man, standing inside an area allocated for journalists, was moving his fist and humming the international communist song.

Follow the order kids: A Maoist volunteer points the way forward for the school kids who were forcefully brought by the organizers to attend the event.

Maoist volunteers stand in queue to organize the mass meeting.

It was definitely one of those rare ceremonies attended by large numbers of media persons. Dozens of camerapersons were present. “I have never seen this many folks in a single program,” commented a photojournalist.

A woman takes photos from her mobile phone.

A foreigner takes photos with her small digital camera. I am not sure if she understood all that was spoken but I overheard her speaking broken Nepali.

With digital camera, everyone is a photojournalist. Former editor of Nepal Magazine Sudheer Sharma takes snaps.

Hmmm, his is pretty big.

A big camera of old days to capture a big event on new times.

Ekantipur reporter Sureshnath Neupane shows a press card issued by the Maoist party for journalists for the show. The card has one big photo of Prachanda. Some reporters though it was not appropriate to put such cards on their neck and took off. I didn’t have one and I was teasing reporters about their affiliation with the Maoist party.

44 thoughts on “Prachanda Public: Maoist Girls, Cameras and Other Scenes”