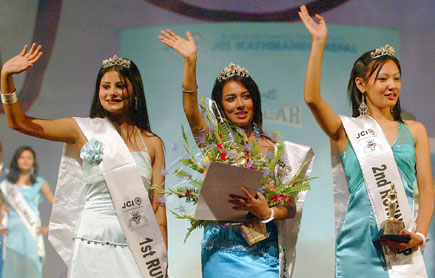 By Darshan Karki
(Inside: A Beauty Contest Amidst Maoist Pressure)

“Teenage isn’t an easy thing to define,” 19-year-old Sambriddhi Rai started the conversation. “The simplest way to put it would be we’re neither too old nor too young. And we haven’t been represented in Nepalese politics. We are the marginalized group in politics. Though full of innovative ideas nobody really takes us seriously.” We were in the premises of International Club, Sanepa (Lalitpur) to talk to the contestants of Miss Teen Nepal 2006 about the thrill of being a teenager. But the unexpected jump to politics came as a complete surprise. It seemed as though the beauties had had enough of answering the same old question of their reason of being in the beauty competition.

“Look at the situation of Nepalese politics,” Arpana Rayamajhi joined the conversation. “Leaders who can’t even stand on their own feet properly are fighting for the chair. I wonder why it is so difficult for us to move forward accepting change?”. Clad in a maroon t-shirt with stylish little holes and “Almost Famous” scribbled on it Arpana herself looked as though she wanted to depict a new generation of youths. “Instead someone young and energetic like Mani Kafle who fearlessly sang [pro-democracy] songs in the 19 day April Revolution should represent us,” she continued.

Indeed it is very easy for youths to complain but what about the solutions? We asked the contestants. “What would you do if you were in a political position?” The beauties looked confused and Arpana came up with the answer once again. “If you ask me I can easily say what should have been done but can’t say what exactly needs to be done.” An answer very much depicting the political awareness among teenagers.

Kusum Hachhethu had a different answer. “I guess the main problem is the lack of people who really understand the implications of politics in the field. The so called intellectuals aren’t active in politics. Take my father for instance. He writes articles, analyzes the political happenings but isn’t in active politics himself.”

It is a coincidence that four of the seven girls taking part in this discussion (organized several days before the finale) ended up winning the four titles declared in the show. Pic by Shailendra Kharel

The discussion was gaining momentum and you could easily tell that the beauties were no way going to revert to talking about ‘beauty’ and ‘teenage’. It must have been the 19 day movement effect, with youngsters like them more interested in analyzing political happenings than busy themselves in the traditional teen talk about movies and fashion. “It’s not only with the reporters but we talk about politics some other times too,” one of them informed. They expressed their frustration on not being represented in main stream politics or being taken seriously in any matter but the most interesting part was the debate about 33% reservations for women.

“They say 33%, I just don’t understand it! What right do the males have to determine how much of what we need? And isn’t accepting 33% in itself accepting we aren’t equal to men? 50% is our right already?” Khusbu Oli debated. Sambriddhi had to calm her reasoning Kathmandu isn’t only Nepal and that 33% was only a step in bringing equality. Though you couldn’t tell if she was convinced by that.

However not all of the seven contestants were enjoying the conversation that was dominated by politics. There were some who had barely spoken a word. And Anju Tandukar seemed to lose her cool when the political talk just moved on from one issue to another. Finally she spoke out, “Weren’t we supposed to be discussing Teenage? How the hell did we jump to politics?” Finally there was no way out than to talk about the intended subject of discussion: “Teenage”.

Vicky Hirachan started the Teenage discussion saying “It is a phase when one can easily drift away. You can’t decide all the matters concerning your life on your own either.” “Parents need to be sensitive to the changes in their children and need to understand them,” Simple Thapa finally spoke out. Then it was the “Sweet Sixteen” lady Swekshya Adhikary’s turn to speak out. “Earlier I used to think that I would get a job immediately after my SLC exams. I used to think then I would be economically independent and could make all decisions on my own too. But when I did cross the “iron-gate” I realized that I had no skill for any job! So much for financial independence, I had so much to learn.”

Arpana agreed with her. “It is a learning phase indeed. Every teenager wants to experiment new things, whether it be good or bad. Smoking for instance is something taken up by most in this age. There’s no rule saying one should take up smoking at 30 but as a teenager one should always know one’s limitations.” Kusum saw teenage as the three phased phenomenon. “Early teens or at 13 we are too small to decide on our own. At 16 though limitations exist you are given certain freedoms as well. In my case I was allowed to wear makeup since then. At 18 you can capable of deciding for ourselves. Parents are there only to provide necessary feedbacks and guidance. You grow at a very fast rate both mentally and physically and have a great deal of enthusiasm and passion for life.”

“And because of the enthusiasm and vigor it is very difficult for us to strike a balance between negative and positive choices” Sambriddhi added. “That’s why moral education give to us as youngsters is of utmost importance. Teenagers today value their freedom but are equally determined to fulfill their responsibilities too. ”

This article, originally in Nepali, was first published in Thursday (Aug 31) edition of Kantipur daily. Darshan blogs at Zade Express.

Miss Teen Nepal 2006 Khusbu Oli in the attire she conceptualized for the show.

A Beauty Contest Amidst Maoist Pressure

In a country like Nepal where Maoits are effectively controlling (and terrorizing) more than 90 percent rural villages, it is indeed a challenge for organizers to successfully hold a beauty pageant. That is only if you receive permission from the followers of the man who is still remembered for launching a cultural revolution in China. That is exactly what happened in Kathmandu yesterday when a 16-year-old girl Khusbu Oli was declared Miss Teen Nepal 2006 in a program organized to promote culture and talent. After receiving threats from the Maoist sister organization All Nepal Women’s Association (Revolutionary), Kathmandu Jaycees, the organizer of the show, had to cut short the program with some changes. Miss Photogenic, Best Smile and Best Cultural Dress and Miss Congeniality, an award for the person voted most friendly by the other contestants, were thrown out of the program. Claiming that Miss Teen program was a beauty pageant on small scale, Maoists had pressurized the organizers to postpone the competition for the time being. Jaycees, according to its chairman Manil Shrestha, explained that the program wasn’t a beauty pageant and was organized to promote culture and expose talents of the participating girls.

Khusbu talks like a feminist when it comes to issues related to women rights. “We need 50 percent and equal rights,” she had told in a discussion with Kantipur daily a few days ago. “Who are these men to give us 33 percent reserve.” She was commenting on recent decision by the parliament. While introducing herself to the audience present at the grand finale Wednesday evening, Khusbu said that women need to move forward changing themselves first and accepting realities. In a common question asked to all top seven contestants, Khusbu gave priority to education over health and wealth. “What do you think is the most important in life among health, wealth and education?” was the question. Five girls said education tops the list while two opined health was the most important factor with education and wealth following it. “Education gives satisfaction which is the key to healthy and wealthy life,” Khusbu said.

“Health is the most important because if you are healthy, you can have education,” replied Arpana Rayamajhi who was declared Miss Talent in the show. Organizers said that Arpana won the title for her guitar and vocal presentation in the Talent Show organized a few weeks ago. Fluent in political expressions, Arpana introduced herself to the audience with these lines among others, “Real people had to be acknowledged if these (beauty contests) serve purpose.”

It seemed that the program was organized by an inexperienced organization with limited knowledge about the procedure. There were numerous lapses. One of the MCs kept addressing a male judge as Miss and the dance performed in the remix version of Kalkatte Kaiyo was so poorly executed that it was torture for audience than entertainment. Some of the participating girls were either confused or seemed to not to be catching up the questions properly. Program was poorly managed and executed. Audiences were bored as organizers spent most of the time talking about sponsors of the program.

Interestingly, one of the questions asked by a judge to a contestant was related to the future of beauty contests in the backdrop of protests by women rights activists. “Some women and organizations protest these kinds of programs arguing that women are portrayed as object,” women rights activist and advocate Sapana Pradhan Malla asked Sambriddhi Rai. “They are also fighting for women rights. What do you think about such protest and how could, in your opinion, such programs could be taken forward in future?” Rai replied: “This competition provided me a forum to showcase my talent and I have already felt my confidence boosted and personality changed for better. I think these kinds of programs should be continued in future.” Also supportive of the program was a former winner of the title. Before handing over the crown to Khusbu, Priyanka Karki, Miss Teen Nepal 2005, described changed that she experienced herself after winning the crown last year. “After winning the crown, she said, I am not the same ordinary girl. I have felt my personality has become better and confidence level has risen.” By DW. This article is based on DW’s report of the event published in Thursday edition of Kantipur.