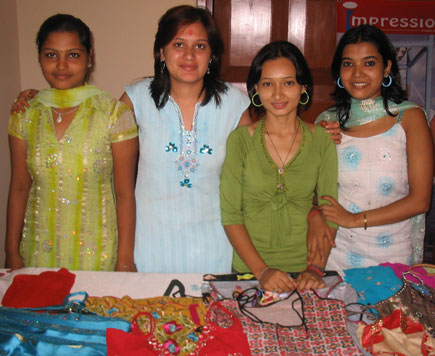 Last week saw Nepal’s one of the biggest fashion and lifestyle extravaganzas when nearly two dozens of models paraded in front of hundreds of trend conscious spectators wearing beautiful outfits crafted by 134 designers from around the country. Third edition of Nepal Fashion Week (August 10-14) showcased traditional, fusion, western, Indo-western and casual wears. Saris of different designs were major attraction of the show as majority of designers included the best wear of Nepali women in their list of creativity. Over the years, fashion industry in Nepal is growing along with the interest and awareness in general public about the designer clothes. That could be visible in the growing number of aspiring fashion designers who enroll themselves in various fashion designing institutes sprouting all over the major Nepalese cities. 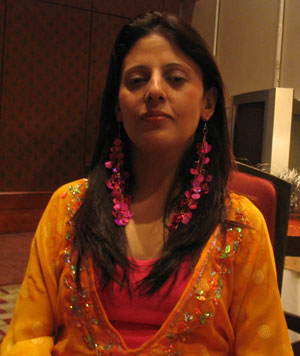 Lady Behind The Show: Shailaja Adhikari, the Managing Director of IEC Nepal, the organizer of Nepal Fashion Week says that overall consciousness about fashion in Nepali public has risen in recent years.

Shailaja Adhikari, Managing Director of IEC Nepal, the organizer of Nepal Fashion Week (this was the third year of NFW), told me in an interview for Kantipur daily that she has experienced growing awareness about fashion and trend in Nepalese over the years. All shows of the five days long event were completely packed with fashion enthusiasts, overwhelming majority were Kathmandu elites, who paid Rs. 750 each for an entry ticket. “People were standing and watching the show as tickets were oversold,” Shailaja said on the last day of the Week. “We tried to provide bigger market and stage for designers this year,” said the lady hoping that the presence of Indian televisions and magazines in the program for the first time will make the difference. 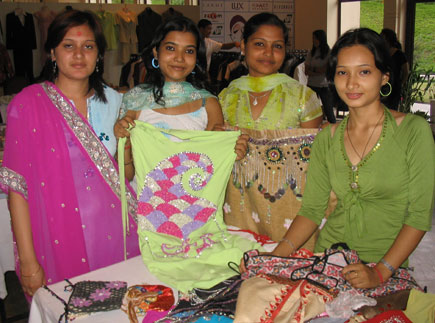 Designers with their creations

I talked to a team of four young girl designers from Janakpur who were taking part in the Fashion Week first time. The three-month-old students of Janakpur based IEC said collectively that the extravaganza was useful for them to gather experience, learn new things and get exposure. “Now we knew the actual demand [of designs] in Kathmandu,” said Preeti Jalan. “We also knew the actual trend in Kathmandu and about people who like to wear designer clothes. We got exposure, got new ideas, learned new concepts and we are all enthusiastic now” Each of the girls displayed a pair of design in the show and they said that their creations “received compliments from many.”

All girls said that they wanted to pursue careers in fashion industry and become the topmost designers of the country. “I used to put new design on my doll when I was child,” said Shephalika Kamal who thinks that fashionable clothing doesn’t only mean those outfits that are displayed in fashion shows. “We can have our daily clothing prepared by designers.” To widen the marked and reach out to the middle class Nepali people, Shephalika opined, designers need to design everyday clothes. “We want the people, however small in number, to know us and recognize our designs,” said Preeti. “And we want to receive the orders for design from around the world.” 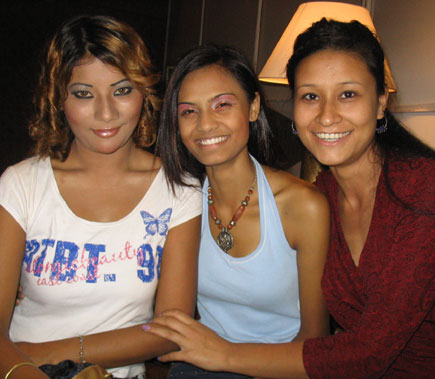 Cats of the Show: Models Shristhi Shrestha, Sabita Maharjan and Ramani Joshi, who were giving interviews in the mid of the make session, said that they wanted more exposure from shows like Nepal Fashion Week so that they could get other opportunities in advertising and modeling in future.

And there were Nepali models who were more than happy to be walking like cats in front of the ‘fashion and beauty conscious’ audiences. But there was a small problem. “When we walk on the stage,” said Sabita Maharjan. “Some people start flashing cameras of their cell phone focusing the upper part and lower part of our body. It feels so bad and we get angry but we can’t actually display our anger at that point.” She thinks that some Nepali viewers are yet to grow up and keep their mind focused on the designers’ creations rather than the bodies of models. “[The whole fashion show] is actually the contest among designers,” she said. “We are just displaying their designs. The audience’s attention should be focused on creations.” Yes, Shristhi added, there must be glamour in a fashion show but not vulgarity. They also said they do catwalks on the stage with blank feelings in the mind. “Yea,” Sabita said. “May be we given attention on the beats of music. Other than that we just have blank mind.” Ramona said that if anyone smiles and she notices while doing cat walk, she usually responds with a smile.

Sabita and her friend Shristhi Shrestha said that Nepali modeling industry isn’t big enough to give full time where as their friend Ramona Joshi said that she was providing money to her family on several occasion working as a model. All three girls said that though Nepal Fashion Week was for designers, they also hoped to attract some important people on the audience row who could later give them assignment in other advertisements.