An angry mob ghearoed Kantipur Complex yesterday shouting angry slogans against the media institution. The mob, dissatisfied about Kantipur TV’s coverage on the killing of Rajesh Gurung, wanted to invade the complex, destroy the facilities and burn the buildings. It reminded me, a Kantipur journalist, September 1, 2004 when same kind of mob vandalized the complex building and burnt cars parked inside. [They were protesting against Kantipur Television’s news bulletin on the killing of karate player Rakesh Gurung by Assistant Sub-Inspector of Police Man Bahadur Adhikari Tuesday night. The protesters said the news was lopsided and resulted in “character assassination” of deceased Gurung. Read TKP report. Another one.]

Mob burnt tires on the main road that goes from in front of Kantipur complex that houses Kantipur Publications and Kantipur Television. All pics Wagle

People can, for sure, express their dissatisfaction over press coverage of any kind. They have their right to do so. There are certain norms to be followed. If you want to raise voice against a report, write a letter to the media making your point. There is an institution called Press Council where you can lodge your complain against the report and the media outlet. I also understand the sentiment of the relatives of Gurung. The report should be accurate. Kantipur TV says that the report was based on their sources at Nepal Police. Generally, such happens to be the case. Police provide information about any crime or events. Some reporters try to independently verify the info before running the story. Kantipur TV has already apologized for ‘the incomplete’ report which means the initial report didn’t put the version from the Gurung side. Such things happen with any media anywhere in the world. But exploiting such mistake and trying to attack the media organization with the help of a politically motivated mob is of serious concern to Nepali journalism.

The crowd. There were about 50 people protesting. Others were just curious onlookers.

This woman said that she supported Kantipur for Loktantra (democracy) but now she was against it. I found so strage that she and others in the crowd were trying to relate the case with loktantra 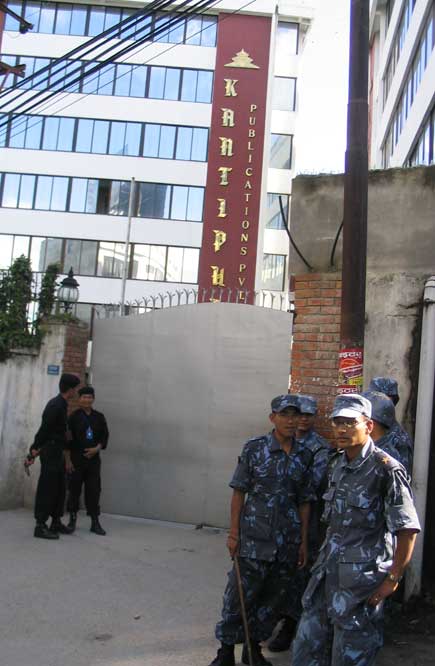 The only comforting thing this time (compared to Sept 1, 2004) was the police presence in front of the complex.

Police killed the player, and Kantipur TV reported. The fact that the mob, which claimed to be acting on behalf of the sportsman, wasn’t speaking about the police who actually killed the player but sloganeering against the media that reported the incident was very strange. It was also not the case that the report killed the player. It was a clear act of intimidation and hooliganism. The mob was trying to kill the messenger.

For a Kantipur reporter, the scene just in front of the office yesterday was simply terrifying. The same mob, while marching toward Tinkune office of Kantipur, manhandled and thrashed a reporter associated with the daily newspaper. In front of the office, while burning tire and blocking the main street for at least three hours, the mob kept threatening reporters. “We will not spare you if you dare go out to collect news,” a man shouted. I was just behind him, calmly watching the procession. I was hiding my identity card second time in my six year long career with the newspaper. [This is the second time Kantipur has been targeted during riots. On September 1, 2004, during protests following the killings of a dozen Nepali laborers by militants in Iraq, a motivated mob vandalized Kantipur complex and burnt some half a dozen vehicles parked inside the complex.] 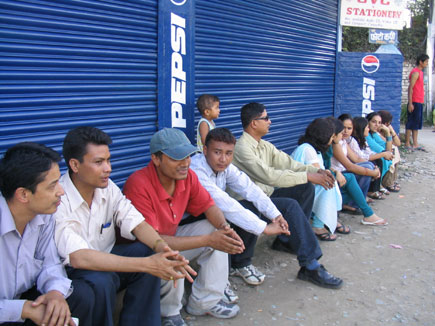 While many of the Kantipur journalists and staffs were trapped inside, others waited for about 3 hours outside the complex to see the situation back to normalcy. (Also two pics below) 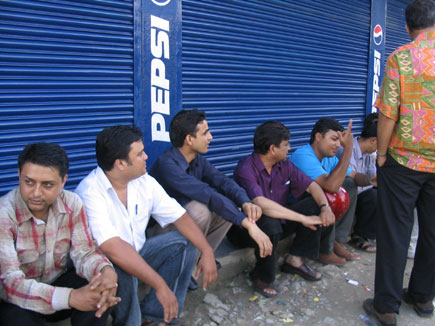 Waiting to get inside.. 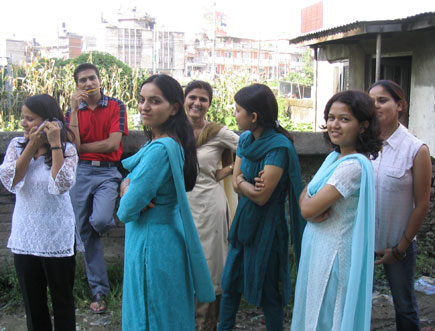 Waiting to get inside..

Another strange part of the mob was that, those agitated persons who entered inside the office to have talks with senior Katnipur executives, didn’t want to be identified. You are claiming to be fighting on behalf of a sportsman because you want justice in the news coverage but you don’t want to be identified? One of the most heard slogans in the mob was this: Loktantra aaudima goli hanna paidaina [You can’t shoot just because you have democracy.] What the hell to do with democracy with the killing? A policeman killed the man and claims that he did that in self defense. That’s a matter of investigation. Just because the killer happens to be a member of security guard of UML General Secretary Madhav Kumar Nepal doesn’t mean democracy encouraged him to do what he did. The alleged mistake was in the TV coverage but the crowd was constantly threatening to burn the paper and directing the protest against the paper. It wasn’t difficult to conclude that the crow was politically motivated and wanted to take revenge against Kantipur for the paper’s pro-democratic role in the movement against Gyanendra Shah’s autocratic regime.

Kantipur folks entering and getting out of the office.

One of my colleague said that he saw his friend, an army officer from Nepal Army’s Bhairabnath Battalion. This makes the case even more complicated. Kantipur had extensively covered the recent atrocities by an Army captain from the same battalion. It is no doubt that many folks in the army, who still want autocracy in the country, see biggest enemy in Kantipur. Two boys pelted at the police from the back of the crowd to instigate the police to add tension in the situation. Another man and a woman, seen in the photo above, said that no one should pelt. I heard someone as saying, “These buildings are made from peoples’ money and people have the right to bring them down. We should destroy these buildings today.” I was quietly listening.

90 thoughts on “Kantipur Ghearoed For Hours. An Experience”