Democracy Day in Nepal: A rally organized by political parties today turned into an unimpressive mass meeting in New Baneshwor. All pics by Wagle

If you start comparing this rally and gathering with that of the last year, then, yes, this is a big leap forward in terms of peoples’ participation and enthusiasm. This was the scenario last year: We were celebrating the first democracy day after the autocratic royal takeover, state of emergency was imposed throughout the country, many leaders and activists were in jail (well, some of them who were arrested just before Feb 8, 2006 municipal elections, are still inside), heavy censorship had tightly gripped the media, no cell phones were ringing (and pre-paid lines that were suspended for the election got life only a few days ago). But if you consider the numbers of people participating in the rallies organized by political parties over the months, today’s how was poor and unimpressive.

Umesh Chandra Thapa, a CPN UML cadre who was shot dead by the army on Feb 8 in Dang featured in placards carried by the participants of the rally and speech delivered by the leaders. It sounded as if they got new agenda to talk about. Lila Mani Pokharel recited a poem “Hudaina bihana mirere tara jharera nagaye… Bandaina Muluk Dur Char Saput Marera Nagaye” and said that to die wasn’t Nepali peoples’ intention.

The king is in Pokhara enjoying his days in the tourist destination. He issued a yearly Democracy Day message Sunday inviting parties for talks but sticking to the argument that Feb 1 election was truly representative and democratic exercise. In a telephone conversation with me, Dr. Tulsi Giri, the vice chairman of the Council of Ministers said that the latest royal message is a step forward compared to that of the royal address to the nation some 19 days ago. Parties are busy with, well, to be honest, nothing. Sher Bahadur Deuba has started speaking things that don’t really provide proper sense to the public. To see the activation of constitution in the annulment of Royal Commission for Corruption Control is nothing more than seeing the naked emperor handsome. Deuba shouldn’t give the impression that he should have been kept in the jail forever.

Martyr is left behind: A placard with photo of Umesh Chandra Thapa was left behind at Thapathali (in front of the Blue Bird Hotel) by a participant of a rally organized by the seven-party alliance. When I saw that on the footpath and was about to take a snap of that, a boy appeared out of nowhere and tried to picked up. Then he realized that he was disturbing a photo-blogger! I told him that he could pick up the placard and I was just taking photo. He did that and tried to fix that over the adjoining wall. That fell. He again picked up and fixed that firmly. 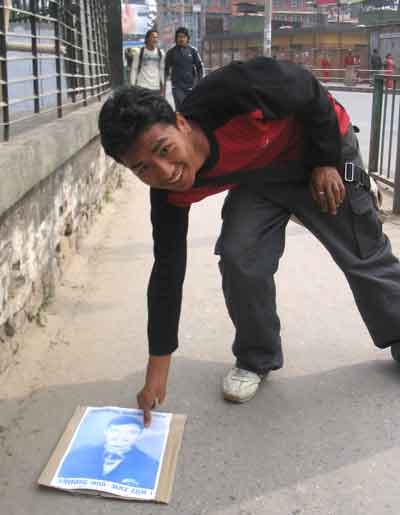 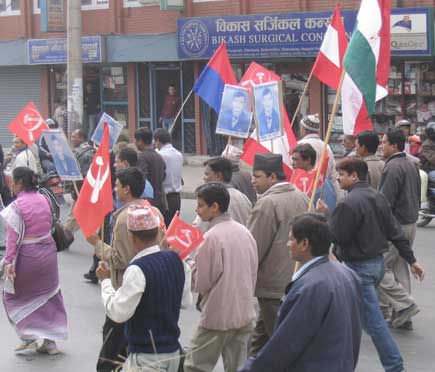 The rally in Tripureshwor. You can count them, they are not many.

Meeting And Discussing: Four women were having some kind of discussion over something that I couldn’t figure out as Lilamani Pokharel, a leftist leader, was addressing the mass in New Baneshwor’s Loktantra Chowk.

Business Over For The Day? People were seen folding flags and packing the stuffs as the mass meeting started. There was nothing new in the speeches delivered by the leaders, there was no enthusiasm in the participants and there was no charm in the rally as no ‘central leader’ was present. 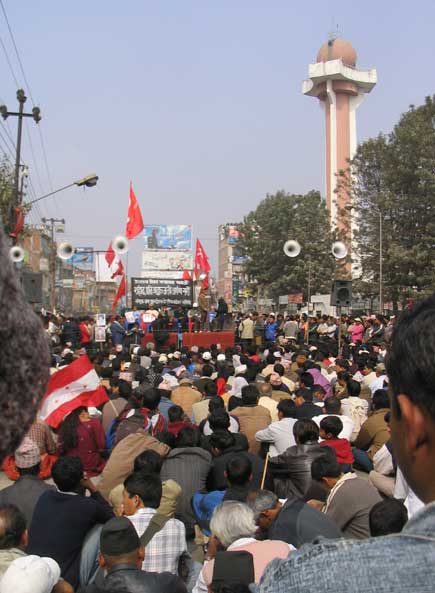 The Mass Meeting that wasn’t impressive.

Umesh Chandra Thapa all over the mass meeting. 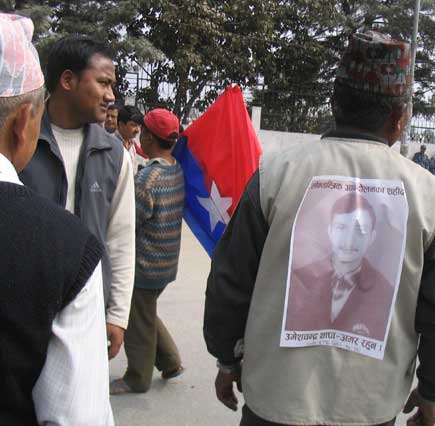 Opinion and Editorial: People were reading Op-Ed page of Kantipur that was, as one of the senior most official in the royal government told me, full of American Ambassador James F. Moriarty. The lead article, by student leader Gagan Thapa, addresses and counters views expressed by Moriarty in a recent statement. The ‘Readers’ Letters’ section contains a letter to the editor by Moriarty in which the American diplomat reacts to an editorial piece appeared on the same page three days ago. 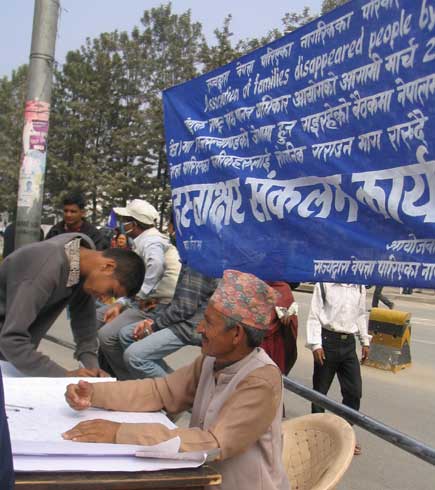 No Disappearance: There was a signature campaign going on near Loktantra Chowk in New Baneshwor that sought public support against disappearances. The banner said that signatures would be sent to the UN telling why they should give special attention to Nepal for reducing the rate of disappearance. 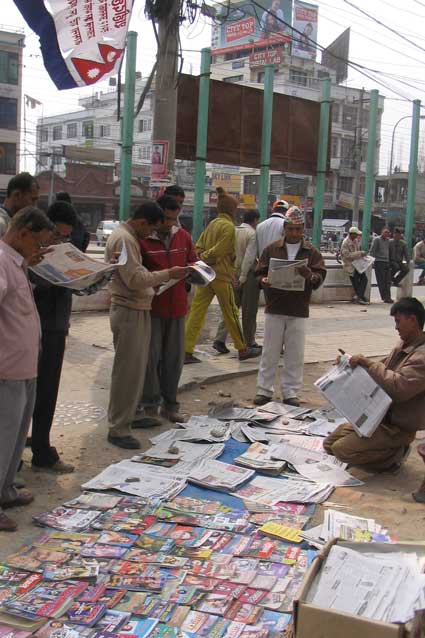 Scanning The Headlines: People in New Baneshwor were carefully scanning headlines of the newspaper that were on sale in a temporary stall near Loktantra Chowk. Last year this day, we didn’t have a newspaper that wasn’t censored by the state. Situation has improved over the months though journalists are routinely harassed by state officials nominated by the king for criticizing the regime.