2. Nepal in (Post) Conflict: Agenda of DDR and SSR

The discourse on disarmament, demobilization and reintegration and security sector [reform] is relatively at the age of infancy in Nepal and fundamentally alien to the public debate. The concept of Disarmament, Demobilization, Rehabilitation and Reintegration (DDRR) emerged from 2003 when the then prime minister Lokendra Bhadur Chand’s government planed to utilize Maoists combatants. The objective of the program was to make the “misguided” Maoists realize that there is an alternative to war. That programme was supported by several international donors’ agencies including Asian Development Bank (ADB). The DDRR program was conducted with the mission of giving training and other income generating skills to Maoists ex- combatants, making them fit to return to their previous life8. It was planed to establish five camps -one each in five development regions- and those who gave up the insurgency would remained in the camps at least six to eight months to complete the training9. However, this first DDRR program failed, likely due to the government’s weak credibility at the time.

SSR/DDR has been a nebulous concept in Nepal to date, and some analysts have strongly opposed this model in the Nepali context on the grounds that it originated from the west democratic tradition. Narayan Manandhar writes “the conventional DDR or SSR models may not be applicable to Nepal as we have a unique situation of our own. None of the two combating forces have been defeated in a war: the war was ceased due to the peace agreement”10. In post armed conflict Nepal a more provocative national agenda in the political landscape has emerged. However; the conceptualization of DDR in Nepal is more contested. The CPN-Maoist argued that conventional DDR is not applicable in Nepal because the People’s Liberation Army (PLA) remains unconquered and has simply entered into a period of political cooperation with former opponents to achieve state transformation11. Therefore DDR has proven a politically sensitive issue in both name and content in Nepal. A group of researchers from the Center for International Cooperation and Security (CICS) succinctly writes about the DDR process in Nepal:

“DDR process in Nepal is a curious combination of ‘classical’ and ‘non-classical …. It is classical in the sense that there are cantonment, disarmament and at least partial planned demobilization and re-integration programmes for some ex-combatants … It is non-classical in the sense that one of the two sides to the peace agreement does not accept DDR as an appropriate name or framework for these programmes, and the explicit and implicit understandings on which the peace-agreement are based combine aspects of DDR, SSR and arms management in an integral but under-specified way. This issue has both symbolic and strategic importance for the Maoists who, seeing themselves as undefeated and is holding out for the integration of significant numbers of fighters into a new Nepal Army.”

Whether DDR or SSR modalities are used, the prime intent is to establish rule of law and create a secure environment for sustainable peace in society. DDR and SSR are the internalcomponents of a peace process and a foundation for peace building. DDR and SSR programs are regulated for establishing the peace and rule of law in conflict stricken societies by addressing the prime causes of conflict and preparing long term security strategies. After a successful popular movement in 2006, the political landscape has been dramatically shifted from the monarchy led state sovereignty toward a democratic framework. Like such armed post-conflict countries, the agenda of DDR and SSR have heightened in the political arena in Nepal but the CPA failed to incorporate a proper SSR process, instead only offering a vague guideline for the integration of PLA members and commitment to end impunity. 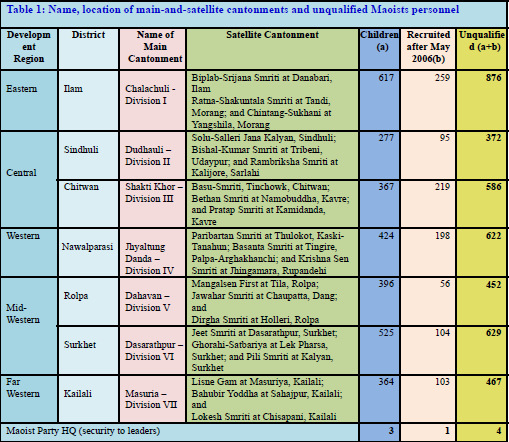 Some of the most important progress in the political history of Nepal has been the Royal Nepalese Army being brought under the civilian government while the Maoists Army was demobilized. In accordance with the historic proclamation by the reinstated House of Representatives on May 18, 2006, the existing provision regarding the National Security Council has been repealed. That proclamation has proposed National Defense Council under the chairmanship of the Prime Minister in order to control, use, and mobilize the Nepalese Army. The Chief of the Army Staff of the Nepalese Army has been appointed by the Council of Ministers14. The existing arrangement of Supreme Commander of the Army has been revoked. The decision of the Council of Ministers on mobilizing the Nepalese Army must be tabled and endorsed within 30 days from the special committee assigned by the House of Representatives.

In the context of Nepal; the process of DDR and SSR seems to have made modest progress. In November 21, 2006, the “Comprehensive Peace Accord” was signed between the Government and the Maoists. The agreement stipulated there could be no attacks or involvement in any kind of violent and offensive activities from either side; no new recruitment in the armed forces of both sides, and that the UN Team monitor and supervise PLA cantonments and Nepal Army barracks. In signing the “Agreement on Monitoring of the Management of Arms and Armies” (AMMAA) on November 28, 2006 between Maoists and the seven parties’ alliance, the government had accepted the principles of DDR and SSR. This Agreement is very significant to the DDR and SSR process in Nepal in the sense that it clearly seeks UN political assistance in monitoring the management of the arms and armies on both sides; confining the Maoist Army (MA) combatants and their weapons within designated cantonments and monitoring the Nepal Army (NA) to ensure that it remains in its barracks. The process proceeded according to the agreement as follows: 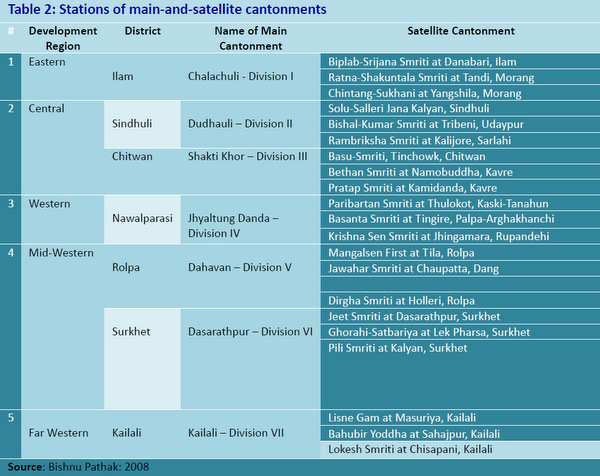 Maoist Army (MA): The MA was confined in 7 main cantonments and 21 satellite cantonments. The designated seven main sites remained under command and control of the Maoist army site commander and the satellite sites by the designated satellite commanders. Arms and ammunition placed in the cantonments under a single lock. All Maoist army combatants registered at the main cantonment sites. Only those individuals who were recruited before May 25, 2006 were made eligible for the cantonment and only those MA combatants who had been properly registered at cantonment sites were considered eligible for possible integration into the security forces fulfilling the standard norms. If Maoist combatants were found to be born after May 25, 1988, they were to be automatically discharged.

Between January-February 2007, the UNDP registration teams, UNICEF child protection personnel as well as the Interim Task Force (ITF) comprising of 111 Nepali ex-Gurkha members of the Indian Army started arms monitoring, registering the MA with weapons. The registered MA and weapons were put under 24-hour surveillance as per the AMMAA. Of the 32,250 registered MA, 19, 602 were verified who met the criteria, comprising 15,756 men and 3,846 women. In the second phase 8,640 personnel did not appear for verification interviews and were automatically disqualified. 4,008 persons remained to be discharged from cantonments after the total of absentees was taken into account: 2,973 of this total were assessed to be under the age of 18 on 25 May 2006 (see table above). The process was completed in December 200715. The societal reintegration of minors and disqualified have just completed in early 2010.

Nepal Army (NA): As agreed, the NA personnel were confined in their barracks, their arms restricted from use for or against any one. In addition, a number of arms and ammunition proportionate to that of the Maoist Army was stored in iron containers under single locks and the keys were given to the concerned army commander. The entire process has been monitored by the UNMIN inspection team. Although there was a provision for each side to assist each other to mark land mines and booby-traps used during the time of armed onflict by providing necessary information within 30 days and to defuse and remove/lift and destroy them within 60 days, this has not been implemented fully yet.

Army and Arms Management Design of the AMMAA: There are seven cantonments where the Maoists Army has been residing which are as follows:

Joint Monitoring Coordination Committee (JMCC): The provisions for the JMCC are as follows: An UNMIN representative will serve as chairman. The nine-member JMCC shall be composed of representatives from the UN, NA, and MA. There will be two Vice-Chairmen, one each from the MA and the NA. The remaining six members will be two each from UN, two NA, and two MA. The Chairman shall report regularly to the representative of the Secretary-General and to the designated representatives of the parties regarding the activities of the JMCC. It shall serve three main functions:

The Joint Monitoring Teams (JMTs), will assist the JMCC at the local level and through site visits. The JMTs will comprise one international monitor as the team leader, one monitor from NA, and one monitor from the MA. The number of JMTs and their deployment will be determined by the chair of the JMCC in consultation with that body. The tasks of the JMTs will include:

(i) Village and community visits and liaison with the civilian community;
(ii) Cooperation with other UN-agencies, and liaison with international organizations and non-governmental organizations;
(iii) Assistance to the parties in creating a favorable operational environment for the conduct of the ceasefire by information sharing and defusing local tension;
(iv) A pro-active concept for initiation of conflict management at the local level; and,
(v) Investigation of complaints linked to possible alleged violations of the agreement and recommending measures to ensure compliance.

Interim Constitution on Transitional Provision for the Combatants (2007): The Council of Ministers has formed a High-Level Special Committee (HLSC) from the mainstream parties of the CA to supervise, integrate, and rehabilitate the combatants of the Maoists Army, and the functions, duties, and powers of the committee have been determined by the Council of Ministers (article 146). The Army Integration Technical Committee (AITC) has already formed, but both committees have been in limbo since the Maoist-led government was ousted.

On Management and Monitoring: Other arrangements regarding the management and monitoring of the arms and the army have been carried out in accordance with the ‘Comprehensive Peace Accords’ concluded between the Government of Nepal and CPN-Maoist on November 21, 2006 and ‘Agreement on the Monitoring of the Management of Arms and Armies’ reached on December 8, 200618 (article 147).

3 thoughts on “A study of DDR and SSR in Nepal”