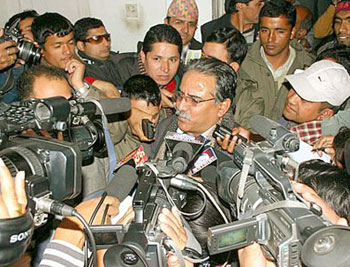 Emerging from the interaction, CPN Maoist Chairman Prachanda told reporters (pic) that the conference was in fact the roundtable conference his party had been demanding.
–a news report.

>>>Interesting remarks by the comrade! So that was what all Maoist hue and cry of round table conference about? According to reports, an interaction program was organized this afternoon that was attended by a handful of ‘prominent’ civil society members and Seven-Party Alliance leaders. During the interaction civil society personalities urged the SPA to stand united to hold the Constituent Assembly (CA) elections within the current Nepali year (mid-April 2008). Senior leaders of the major factions of the SPA who took part in the interaction program said that they took the suggestions positively.

A meeting of the top SPA leaders was slated for today afternoon at the PM’s official residence at Baluwatar to finalise the outstanding political issues. Sensing that the “authoritarian” SPA leaders were using them just to keep them as witnesses to unilateral decisions (or rather fulfill the Maoists demand of organizing the so called roundtable conference in the name of interaction), chairman of the Nepal Federation of Indigenous Nationalities, Pasang Sherpa walked out of the interaction.

But I think if the interaction makes Maoists happy, it’s fine. What’s the problem is giving a weeping child a sweet if that makes him happy. Today’s interaction is just a chocolate for the Maoists. We all know the real shots will be called by the SPA leaders themselves which is okay if they indeed decided to patch up and take the country out of this current deadlock and lead us towards elections.

25 thoughts on “Maoists Got What They Wanted: "Roundtable Conference!"”