Role-hungry statements from the UN will only complicate matters. An excerpt from an article published in the Kathmandu Post:

If two of the capital’s most notorious gangsters- Milan Gurung alias Chakre Milan, and Rajib Gurung aka Dipak Manange, both of who are in prison now- were to form a political party, continue with their criminal activities and then say that they would talk with the government only under UN supervision, would the UN jump in?

Have a look at the UN’s official news portal. On Oct 23, it carried excerpts from Secretary-General Ban Ki-moon’s latest report to the United Nations Security Council: “The past year saw unity among eight key Nepalese parties tested by their failure to carry out agreements, including those covering responsibilities toward cantoned Maoist personnel and the return of properties seized during the 10-year conflict.” Secretary-General recommends a review of the Comprehensive Peace Agreement and its implementation. “The shortcomings and enduring strengths of the Comprehensive Peace Agreement need to be assessed in order to build on its achievements,” he writes. END_OF_DOCUMENT_TOKEN_TO_BE_REPLACED

[Update: Nepali journalists are organizing a protest rally in Kathmandu now (10:30 AM) to raise the issue of Biredra Sah abduction.] 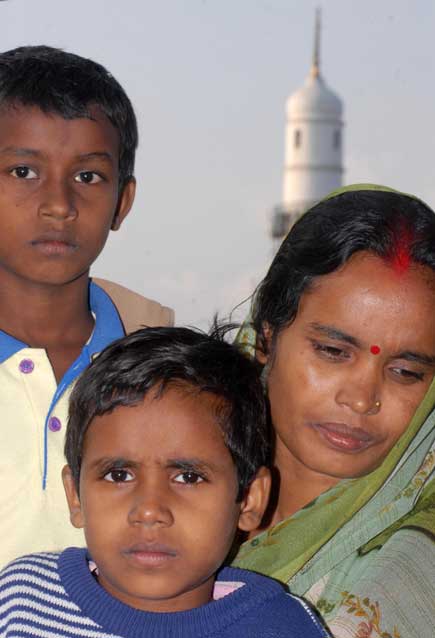 Umarawati Devi Sah, wife of missing journalist Birendra Sah, with son Bibek and daughter Bidhya wears a weary look at a meeting with a Kantipur journalist at a guest house in Kathmandu on Monday. Umarawati arrived in Kathmandu seeking help to trace the whereabouts of her husband who was abducted nearly a month ago. Pic by Narendra Shrestha via the Kathmandu Post.

According to a news report published in today’s edition of the Kathmandu Post, the Maoists have already killed journalist Birendra Sah. “The Maoists shot Sah dead the day after he was abducted,” told an unidentified source to the Post. The source, whose identity withheld by the Post “for obvious reason” said Maoist cadres Ram Ekwal Sahani and Kundan Faujdar approached Sah and his journalist colleague Ram Dev Das, who is the FNJ district member in Pipraha market of Bara on October 4. END_OF_DOCUMENT_TOKEN_TO_BE_REPLACED