Jaya Bahadur Gajmer, a blacksmith, with his grandson and brother Khadga Bahadur Gajmer (left). Both brothers were beaten up by the patrolling soldiers. All pics by Wagle

When I reached at the home of Jaya Bahadur Gajmer, a blacksmith, along with two Americans, the family, busy in taking care of beans, greeted me with surprise. This family, I knew, was working for my family for generations and today I was not there as an employer but as a reporter who wanted to know their version of the changes and sufferings in the village life. “Oh..my God,” said an astonished Dil Maya Gajmer, the wife of Jaya, after about 15 minutes of our visit to the family. “Hajur lai ta maile sana bahun po bhanthaneki ahilesamma. I was taking you as your younger brother. Now I recognize you.” This explains my detachment to the village. Even though I spent little time in village, an introvert by nature, I rarely mingled with villagers regardless of their cast. (Talking about the cast, I really hated the discrimination ever since I knew about it.)

I don’t know why, but after she recognized me, Dil Maya started opening up. She told me how she was beaten up by the patrolling soldiers three years ago at the age of 57. “Babu, tyo umer samma malai kasaile hatpat gareko thiyena,” she said while trying hard not to let her tears go out of the eyelids. “No one had beaten me up till that time. But those aliens who appeared in this village suddenly beat me and other members of my family. They didn’t even spare my son-in-law who was visiting us at that that time. “Maile bhane yi hamra jwyai hun, hijo matra aayeka pahuna, inlai nakuta I told them that he was our son-in-law, a guest who had come to us just the other day,” Dilmaya remembered. “But they kept beating.” 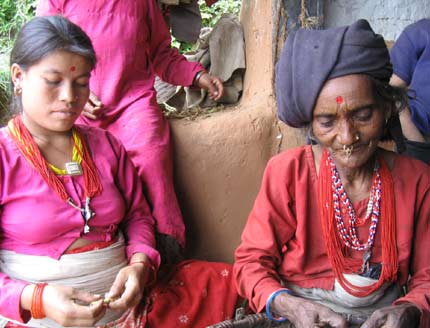 Dil Maya Gajmer, right, with her daughter-in-law. Both women were beaten up by the patrolling soldiers

Compared to her husband Jaya, Dilmaya is vocal and fluent. Her voice is stronger and louder. It takes no time to conclude that she is the real in charge of the Gajmer family that includes 2 sons, 2 daughters (one of them married), 1 grandson (from the oldest son) and one granddaughter (from daughter). Of course, it’s a difficult life for the family in Katti (Ward 7) of Duragaun village that hasn’t has enough land and scarcity of sustainable jobs. Yes there were many complains about the difficult life but the immediate concern for the family was about the weather. It wasn’t raining for quite some time and there were many things to be taken care of in the nearby field. “Ke hunu ni harjur dukha sukha gariyekai chha,” said Jay. “Tara tyo kuteko ghatna le nikkai chitta dukhayeko chha. [We are doing okay but that beating incident has hurt us deeply.”

Three years ago, in the month of Pousha, a group of security men (the Unified Command) while patrolling in the village had gone to there to fetch their son Tek Bahadur. Tek Bahadur was suspected of being associated with the army. Other villagers confirmed this where as the family denies their son being a Maoist. I couldn’t meet Tek Bahadur whom I know from my childhood days.

“Boot le purpuro ma hanyo,” said Jaya. [They kicked me on my head.]

The security men beat Dilmaya, Jaya, his brother 51-year-old Khadga Bahadur (who lives with his family separately in an adjoining house), wife of Tek Bahadur and Jaya’s son in-la. That was, according to the details provided by the family, an indiscriminate act of soldiers who were desperate to find their son.

“After beating us,” said Dilmaya. “They forcefully took Rs. 12 hundred that was inside the cupboard.” The cupboard was on the front balcony. “My husband had earned that money doing labor work at a bridge construction site in the stream down in the valley. Baluwa bokeko paisa. [Money earned from carrying sandbags].”

After seeing humiliation in front of her guest (son in-law), Dilmaya decided to curse the soldiers for their misdeeds. “Parmeshwor yo thau ma tero paila nafarkos bhanera sarape. Bhagwan le sune jasto chha, tiniharu aayeka chhainan” [“I cursed them saying that they will never be able to come in this village again,” she said. “I think the God has listened to me. They haven’t come here again.”] 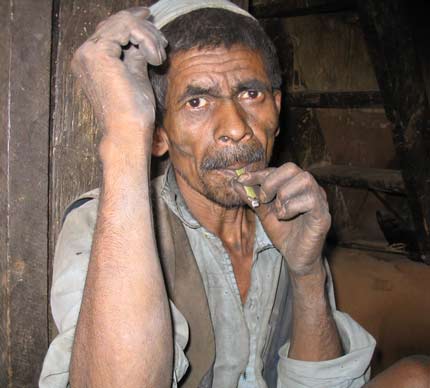 What about the Maoists? Do they come? Yes, they do but, Dilmaya said, they don’t “beat us like army.” “Yes,” she said. “I know they are also not working for poor people like us. I complained them about the beating incident and they did nothing. I told them ‘you people come here and go but army come and beat us.’ I hope no one side rules [the country] even if that is victorious.”

Dilmaya and her family ha seen see changes in peoples’ perception toward the touch based discrimination. “It’s because of the change in time,” she said. She added that the issue wasn’t really about someone eating things touched by the other or someone entering houses of others but of respect given to one side by the other. “Arka ko ghar ma pasera thulo manchhe hune hoina,” she said. [You don’t become great by entering someone else’s house. We grew up eating outside. As the time has changed we don’t say we want to stay separately or enter the houses of Brahmins and Kshetris.” Dilmaya accepted that the discrimination is practiced even within the so called untouchables. “Yes I don’t enter inside and eat in damai‘s house [a cast that practices tailoring].

Next: Story of Pabitra Poudel, 36, who lost his 23-year-old brother in the conflict and is equally hated by the army and the Maoists. His brother Tanka, a Maoist soldier, died in a clash with government soldiers and withing days his brother died Maoists destroyed the office where Pabitra was working.

8 thoughts on “Nepali Village Story: Maoists Not For Us But Better Than Army”