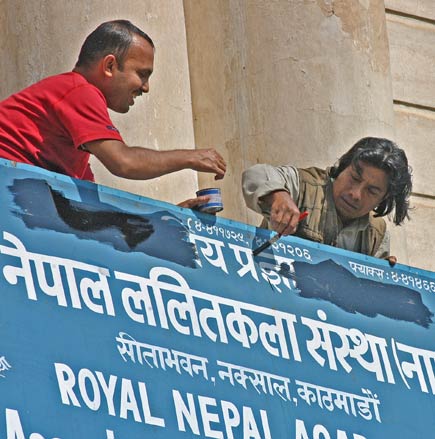 As overwhelming majority of Nepali people are ready to get rid of monarchy from Nepal, people have started to remove signs and symbols of monarchy from public places. Take the photo above as an example. Artists today deleted the word ‘royal’ from a sign board at Nepal Association of Fine Arts (NAFA) this afternoon. NAFA functions under, well, we too delete the word here, _ _ _ _ _ Nepal Academy. In a place where symbols do matter, such development will have significant impact. Man on the right in the photo above is prominent painter Kiran Manandher. The parliament is expected pass a historic proposal on Monday that will drastically cut the rights and privileges of the royals in Nepal. Pic by Bikash Karki

120 thoughts on “Painting The Royal Away: We Will Never Forget This”