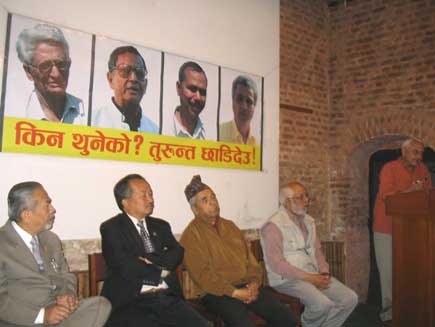 The popular civil society leaders are currently behind the bar since on January 19 this year, a day before the planned massive demonstration of the seven-party. They have been accused of “spreading rumors and thus disturbing peace and security of the country.”

“Why have the authorities continued to detain the civil society leaders while the similar detentions have been termed unlawful by the court [in hundred of habeas corpus petitions after January 19]?”, Nilamber Acharya, member of the constitution drafting committee, asked.

Acharya was speaking at a program organized by senior journalist Kanak Mani Dixit and President of Ganesh Man Singh Academy Nabindra Raj Joshi in a bid to raise voice against “illegal detention” of the civil society leaders.

Speaking on the similar vein, former Supreme Court Justice Laxman Prasad Aryal, advocate Subash Chandra Nemwang and human rights leader Padhma Ratna Tuladhar have also condemned the continued detention of the civil society leaders, demanding that they be released immediately. They have termed the continued detention of the four civil society leaders who support democracy and peace in the country as an example of autocracy in the country. 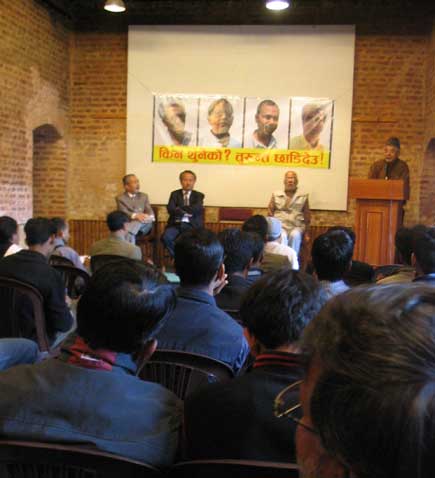 “If the government has any morality, it must release the civil society leaders and other political leaders,” said Aryal said.

Laxman Aryal: It would be suicidal to abandon the law by those who are supposed to abide by the same. Country became failed state since Feb 1, 2005. If you leave ignore the basics of the statehood, you head to anarchy. When law ends, tyranny begins. So called sate-it’s not real- is against the law and forcefully captured…The rule of law is necessary to run the country peacefully…Do courts have to function under the direction of Dr. Tulsi Giri? Even the King who is exercising executive power must come under the scrutiny of rules and regulations…Guns aren’t the only one that blocks peace. Ignoring rule of law also creates unfavorable condition for peace.

Subash Nembang: Had there been a functioning democracy in the country, the government would have been happy to see protests because that would strengthen the democracy. They will be detained even if released under pressure because such thing happen in autocracy.

Meanwhile, Citizen Movement for Democracy and Peace (CMDP) has decided to organize a sit-in protest at Ratna Park from 4 to 6 p.m. on Monday against the continued detention of the civil society leaders. 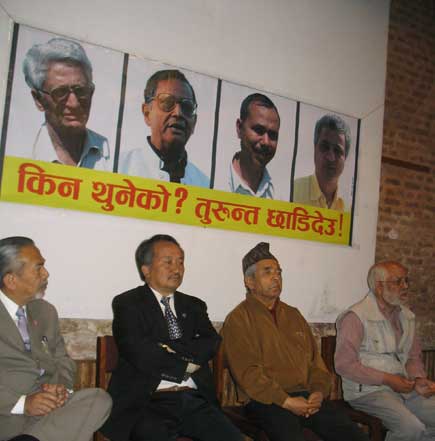 36 thoughts on “Why They Are Jailed? Free Them!”